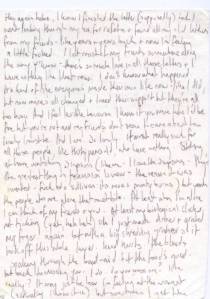 In 2002, when I borrowed Milan Kundera’s The Unbearable Lightness of Being from Murdoch University library (it is in South Wing Level 2, if you wish to borrow it yourself) there was a beautiful postscript to a letter tucked between the pages midway through.

It is unfinished; instead of sending it, the writer cast it out into the world, like a message in a bottle. She thought the next reader of Unbearable Lightness would be the appropriate reader, as I hope the readers of this blog are appropriate readers too. It is written on a postcard size piece of white card in black pen printing, small and crowded. This is what it says.

[front]
Hey again babe, I know I finished the letter (supposedly) but I went looking through my box for rafeta & found all my old letters from my friends – like years + years back & now I’m feeling a little fucked. I lost most of my friends somewhere along the way y’know – there’s so much love in all those letters +I have nothing like that now. I don’t know what happened. It’s kind of like everyone’s made their own life now – like I did, but now mine’s all changed + I need their support but they’re all too busy. And I feel terrible because I know if you were here I’d be fine but you’re not and my friends don’t seem to care about how
lonely I must be. And I am. So lonely. It must really suck for all those people, like thirty years old, who have nothing. Sitting at home watching the Simpsons (like me – I love the Simpsons – they’re the greatest television show I swear – the reason it was invented – fuck ed o’ sullivan its moe + monty burns) but yeah the people who are alone that must bite. At least when I’m alone I can think of my friends & you. At least my biological clocks not ticking (yet, heh heh) oh I just made dinner + grated my finger. again. but with a big shredding grater so it took of this whole layer. And hurts. the bloods soaking through the band-aid but the food’s good.
but back to missing you. I do.. do you miss me? like really? It may just be how I’m feeling at the moment
(actually I know it is) but sometimes I get the

[back]
feeling you don’t really. or not as much as I want you to. anyway. Am I being foolish trying to push on you something that doesn’t exist? not really anyway. I’ve no doubt you want to love, to love and be loved, you seem so much like you want to be in a long type relationship but do you with me? like honestly? honestly. I need to know. I feel like I’m just reaping the benefits of you wanting to have someone. I fit the bill after all. of being someone.

Why didn’t she finish the postscript? Why didn’t she give it? Did she start again and give him another? What did the first letter say? What’s changed in her life? Is her lover far away?

It starts off calmly. Sadly, but thoughtfully – I think she was writing it slowly. Yet with my knowledge of what is to come, I picture her straining to avoid mentioning the doubts and fears and hurts about her lover that are actually at the forefront of her mind. The first seventeen lines (until the ‘do you miss me?’) scream about what they do not say, rather than what they do say.

Yet from then she drops the pretense. (I’m saying this because this is what I’ve known in my own life – the unexpected phonecall which tries to be polite, which insists it’s about nothing in particular, and then suddenly explodes at some flashpoint; the brooding silence insisting it is not brooding which suddenly turns to accusation; I have done these things and had them done to me.) What had not been said is now said!

And then at this climax, at this point of intensity – it ends! What a poignant line – ‘I fit the bill after all. of being someone.’

I hope, all these years later, you’ve found the right person. I hope you still watch the Simpsons. I’m glad you left the letter in the book. It’s the most interesting thing I’ve ever found, a window into a stranger’s heart.