Writing NSW is honouring Katharine Susannah Prichard this month, the seventh writer in their annual celebration of our Australian literary heritage. Why read Prichard in the year 2020, fifty-one years after her death? I want to answer that by focusing on the joys her work can bring us today. This reading list accompanies the first video I made with Writing NSW for the celebration, which will be streaming on their site from 9 November 2020.

END_OF_DOCUMENT_TOKEN_TO_BE_REPLACED

Today is the 51st anniversary of Katharine Prichard’s death. As part of the commemoration of the fiftieth anniversary last year, the KSP Writers’ Centre published an anthology called Kaleidoscope, collecting creative non-fiction, fiction, and poetry about Katharine, her husband Hugo Throssell, and their house in the hills of Perth, now the home of the centre. The published pieces were the best entries in a competition; Shey Marque judged the poetry and I judged the non-fiction and fiction. The standard was high and the collection is a significant interpretation of Katharine and her legacy, as well as a good read. I wrote in the judge’s report, ‘

Katharine was a complex person with many aspects to her life and a writer with a diverse oeuvre. This multi-voiced anthology captures some of that diversity and honours her political commitment to the collective. It moves across genres, across countries, across decades, beyond the span of her own long life into the fifty years since her death and even into the future.

It includes a moving fictionalisation of Hugo’s last moments through his eyes, the story of a mother giving birth in Fiji, where Katharine was born, and Denise Faithfull’s intriguing account of her literary pilgrimages in the footsteps of James Joyce and Katharine. I contributed a brief biography of Katharine’s life as an introduction. Katharine’s granddaughter, Karen Throssell, launched the book and her wonderful speech can be read here.

It’s a hard book to get hold of, but worth the effort. The first print run sold out on the launch day, but I believe there has been a second print run. To buy a copy, you can contact Wild Weeds Press at the KSP Writers’ Centre – wwp-admin@wildweedspress.com. Not sure of the price, but $20 or $30 plus postage, I think.

I try to teach my kids to be careful with books but it doesn’t work with two-year-old Sarah. She has a very physical relationship with books. The ones she loves best she bends their covers until they break (Favourite Fairy Tales), tears out the lift-the-flaps (Hop Little Bunnies), scribbles on the faces of the characters (That’s Not My Llama). ‘She’s getting the paperbacks!’ her brother called out urgently once.

END_OF_DOCUMENT_TOKEN_TO_BE_REPLACED

The first thing I did when I started writing a biography of Katharine Susannah Prichard was to read all of her novels, roughly in order. I even found a rare copy of her rarest novel, Windlestraws (1916) at just the right time. But I didn’t find a copy of her second rarest novel, Moon of Desire (1941) – at least not at a price I wanted to pay – and so it languished unread, as I marched on with other more pressing things. She rated it lowly herself, explicitly writing an action-filled romance when she was short of money in the hope of it selling well and being optioned as a Hollywood film.

END_OF_DOCUMENT_TOKEN_TO_BE_REPLACED 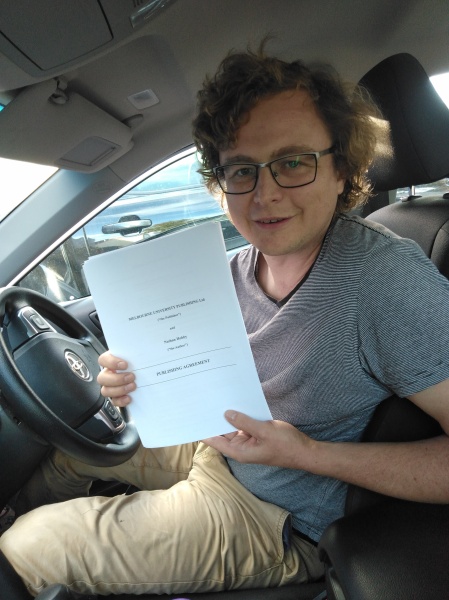 Here I am in the Officeworks carpark on Thursday signing a contract with Melbourne University Publishing for my biography of Katharine Susannah Prichard.

I have to submit it by 1 September (gulp – this has become a bit harder since isolation, now there are children with us all the time). The publisher has let me go to 150,000 words (about 500 pages) – twice as long as my PhD, which only covered the first part of Katharine’s life. I have two chapters to finish off, then an immense amount of editing to do. (Alas I’m at 159,000 words right now, so it shall include more cutting!) It’ll be published in the first half of 2021. Really hoping I can have a book launch by then. A national tour would be nice, children permitting.

It’s been a long road, six years working on this, and sixteen years in the literary wilderness since my first book, so it means a lot to finally be coming back. Thanks to everyone who’s accompanied me along the way.

I miss blogging. Once I’m done, I’d love to get back to it. At the moment, time has become rather scarce. I miss you all!

It seems wrong, as a supposed writer, to be silent about the bushfire crisis. I haven’t even written anything in my diary about it. It’s like someone living through the opening days of a terrible war and not remarking on it. But like so many Australians, I’ve been following compulsively. Through Twitter in my case, the feed refreshing to show photos out of Mallacoota as the sky turned red and then black, and tears came into my eyes at the thought of those thousands on the beach and in the hall as they waited for the end of the world.

The compulsion has also been because I thought that this, finally, had to be the turning point. This was when Australians woke from our complacent sleepwalk into climate change. This was when we realised what a hotter world was going to be like. But someone tweeted weeks ago that climate action is to Australia like gun control is to America. And sure enough, the fossil fuel industry, the Murdoch empire, the LNP, and the other climate deniers are trying to fool us again, to take us away from the moment we could demand real action.

Australia, don’t be fooled. Listen to the science. Get out on the streets, demand change.

Today, I finished off the decade by picking up the bound copies of my PhD thesis. The university library doesn’t collect hard copies any longer, only electronic files. I hope their server is backed up well; I bet it’s not fail-safe. I’m glad to have something to hold at the end. END_OF_DOCUMENT_TOKEN_TO_BE_REPLACED

Art Was Their Weapon: The History of the Perth Workers’ Art Guild by Dylan Hyde (Fremantle Press 2019)

What a labour of love Dylan Hyde’s Art Was Their Weapon is.  The interviews for this history of the Perth Workers’ Art Guild in the 1930s go right back to 1993. Many of the key players from the guild were still alive then, and lucid. None of them are still with us today, and so in his extensive interviews, Hyde has preserved the voices of a generation of radicals and a fascinating milieu. END_OF_DOCUMENT_TOKEN_TO_BE_REPLACED