I wrote a short review of Katharine’s 1948 novel, Golden Miles, for my monthly column in the KSP Writers’ Centre newsletter and it’s now up on the centre’s website. 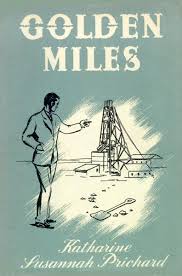 Golden Miles (1946), the second in Katharine Susannah Prichard’s goldfields trilogy, spans 1914 to 1927 in the Western Australian goldfields, from the eve of World War One to the eve of the Great Depression. Sally Gough is the central character even more clearly than in The Roaring Nineties, and the rather untidy narrative takes her through a series of trials, with Paddy Cavan the nemesis lurking close to many of her misfortunes. At the beginning of the novel, she kicks him out of her boarding house for his gold stealing racket. He promises she will pay a high price; in one sense, the rest of the novel proves him true, even if he is only minimally directly responsible. The other way to sum up the disparate happenings of the novel is as the tales of the fate of Sally’s four sons coming to adulthood, each representing a different way of living in the world. All of this is against a bigger backdrop, as Sally’s son, Tom, reflects: “There were those sinister forces outside Sally, her home and her sons, always threatening the security of the small fort she had built for herself. No one lived alone in a world where war, disease and the ruthless struggle for wealth and power, swept thousands of little people like her into the maelstrom of economic and national crises.” (99)