Katharine Susannah Prichard was seventeen in 1901 when My Brilliant Career was published, the same age as the main character, Sybylla. In a radio broadcast paying tribute to Franklin in 1944, Prichard remembered, “What a sensation it created! Most of the well known writers at that time were old, and here was a girl writing with vigour and realism which amazed everybody.”  END_OF_DOCUMENT_TOKEN_TO_BE_REPLACED

I’ve just finished reading Miles Franklin’s My Brilliant Career (1901), a novel still fresh and intriguing 114 years later. It covers a few years in the life of Sybylla, a determined young woman trying to break free of the restraints of poverty and the expectations of marriage in rural New South Wales during the drought of the 1890s . Jill Roe writes, “It was undoubtedly the literary event of 1901, the only significant Australian novel in the year of Federation; and by now it is more or less recognised that in Australia at the turn of the twentieth century, feminism and nationalism went together as radical forces.” (Stella Miles Franklin, epub edn, 133) END_OF_DOCUMENT_TOKEN_TO_BE_REPLACED

Tributes to writers who are dead always sadden me. I know how much better it would have been to appreciate their work when they were alive. But, today, I am happy to be talking about Miles Franklin, whose novels are among the finest written in Australia, and who still lives and works among us – glory be!

It’s Katharine Susannah Prichard, in a 1944 ABC broadcast about her friend Franklin. Captured in print in the year 2000 in Delys Bird’s edited selection, KSP: Stories, Journalism and Essays, it sounds ghostly: the “today” is ghostly; the “lives and works among us” is ghostly. Franklin had ten years left to be celebrated before she died, and Prichard a whole twenty-five. I hope they felt appreciated enough in their lifetime, but I don’t think either of them did.

Did Prichard imagine the posthumous tributes the people of the future might pay her? Would these imagined tributes have been any comfort to her, or only a sadness?

The Christian tradition talks of the “great cloud of witnesses” observing the living. The cloud is a metaphor but the concept is meant quite literally – the dead await the resurrection in the New Testament; their story is not done, their awareness is not finished. Yet even the NT does not talk much of a duty to remember the dead, beyond remembering the example of their faith. We remember them for our sake, not for their sake.

Prichard didn’t believe in life after death; she regarded all supernatural beliefs as superstitious. I can’t be paying tribute to her, then, for her sake. Or not exactly. Not “her” as a living being, but possibly “her” as our cultural memory of her. I can pay tribute to her as a dead person, occupying that peculiar state all the dead occupy. (It’s overwhelming to start trying to conceptualise just what a dead person is.)

We pay tribute to the writers of the past for other reasons than how it makes them feel. We do it because it deepens us. It recognises the reach of the dead into the present. It recovers a piece of the past, the best we can hope for, snatches and scenes of stories from the rubble. 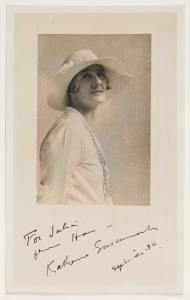 Katharine Susannah Prichard’s third published novel, Black Opal (1921), is set in the opal mining settlement of Fallen Star Ridge. It has two significant plot strands: the Ridge’s pure, beautiful Sophie coming into womanhood and torn between three men; and the attempt of an American to buy out the individual miners and commercialise operations.

Perhaps the truer title would be Fallen Star Ridge, as the novel is focused on the opal mining community itself as an ideal. Between the publication of her first novel, The Pioneers, and this one, KSP had committed to communism, and the influence is evident. In chapter VIII of part I, the narrative stops and KSP paints a picture of the workers’ utopia the settlement represents.

Ridge miners find happiness in the sense of being free men. They are satisfied in their own minds that it is not good for a man to work all day at any mechanical toil; to use himself, or allow anyone else to use him, like a working bullock. A man must have to time to think, leisure to enjoy being alive, they say.  (64-5)

To a man, Ridge miners have decided against allowing any wealthy man, or body of wealthy men forming themselves into a company, to buy up the mines, put the men on a weekly wage, and work them, as the opal blocks at Chalk Cliffs had been worked. (65)

The utopia is threatened first by missing opals (who stole from their brother?) and then an attempt by the American, John Armitage, to buy up the mines. As a kind of utopia, it is rendered convincingly, a plausible depiction of how people might have led a  co-operative existence a century ago in rural Australia.

Central to the utopia is Michael, a saintly autodidact who looks after the needy in the community and quietly dispenses wisdom. I can’t help wondering if KSP imagined a similar role for herself, if she was to ever find herself living within a workers’ community; she must have often wondered how to reconcile her bookishness with her commitment to the working class. The workers of the Ridge are not the anti-intellectuals one might assume:

Ridge folk were proud of Michael’s books, and strangers who saw his miscellaneous collection – mostly of cheap editions, old school books, and shilling, sixpenny, and penny publications of literary masterpieces, poetry, and works on industrial and religious subjects – did not wonder that it impressed Ridge folk; or that Michael’s knowledge of the world and affairs was so extensive. He had tracts, leaflets, and small books on almost every subject under the sun. (9)

At the beginning of the novel, Michael makes a promise to Sophie’s dying mother that he will make sure she does not leave the safety of the Ridge for the evils of the world beyond it. Trying to keep this promise is nearly his undoing; it is to no avail – Sophie leaves, which is nearly her undoing.

A writer who has left some sort of a record of almost every day of her adult life would seem to be the perfect subject for a biographer, but it can prove to be a mixed blessing and I think it has here. In her mostly positive review, Goldsworthy argues that the ‘empiricist historian’ approach leads to a wealth of detail that can cause the reader to become ‘benumbed by facts’, an opinion to which Hergenhan takes exception, claiming that ‘[r]eaders will deeply feel the density of the representation of the living out of the life’…
(History Australia, 89.1, 2009)

Where there’s a scarcity of information on a subject, the biographer is forced to read the fragments deeply and make much of them. Where there’s the glut of information, as in this case, it’s harder to get to what really matters.

The full passage from Goldsworthy’s review is:

Roe’s approach to the art of biography is traditional and straightforward:  she  is  an  empiricist  historian  and  that  is her methodology. The book is a magnificent feat of exhaustive research, but that in itself has one major disadvantage: the reader must plough through lists of meetings that Franklin  went  to,  friends  she  visited, relatives  with  whom  she  corresponded  and  even,  at  one  point, the  specifications  of the  ship  on which  she  sailed  to  America. While these  catalogues go  some way towards conveying the dense texture of Franklin’s life, there is too  little  summary  and  pulling-together of the details; every now and then  the reader must simply stop,  benumbed  by  facts. (ABR, February 2009)

Sylvia Martin goes on to write:

Goldsworthy  wishes  the  biographer  had  delved  more  into  the  realm  of  speculation  and opinion; Hergenhan claims she ‘calculatingly stands back, leaving readers free to “speculate”’. Roe herself wrote in an earlier publication that ‘[a] strictly historical approach should go a long way to resolving the paradoxes’ of Miles Franklin’s life. But can such an approach, even if the ‘life’ is contextualised as thoroughly as this one is, make for a satisfying biography? Biography is a hybrid genre and the narrative strategies employed to shape the life in question as well as the biographer’s own interpretation of elements of that life are surely as important as accurate and meticulous historical research. To quote English biographer Hermione Lee: ‘[w]hether we think of biography as more like history or more like fiction, what we want from it is a vivid sense of the person’. Like the ABR reviewer, I longed for more breaking away from the chronology, more extended drawing together of patterns and connections, more sense of the peaks and troughs of Franklin’s life that tend to be flattened out in the daily record, more risk-taking from the biographer.

This idea of ‘breaking away from chronology’ is a key one for the biographer. The biographer has to see patterns that aren’t clear in the day to day detail, and know when to tie together events separated by time but linked by theme. The review also raises the issue of spending the right amount of time on the ‘peaks and troughs’, as against ‘ordinary time’, the less remarkable phases of someone’s life.

A lot of this, though, comes down to what readers are looking for in a biography – and for many, many readers, Jill Roe’s account was exactly what they were looking for.

Miles Franklin evidently had very bad teeth. Trips to the dentist punctuate her biography. Perhaps I’ve reached the final one, though, because – now in her early forties – she’s just had all the teeth taken out and received false teeth. (The horror of having all of one’s teeth pulled filled me up, reading that last night before bed.)

The question for the biographer: how much to tell about trips to the dentists? In Miles’ case, the biographer is working off extensive, daily diaries, and I’m sure they are full of Miles’ dental agony, of which we are only fed the smallest amount. I wonder, though, if it falls in the category of worth mentioning early on, along with a brief sketch of dental conditions in Federation Australia (and why teeth might be such an obsession), and then not mentioning again until she gets them pulled out?

It is part of the dilemma of conveying a sense of someone’s life – what’s the balance between the everyday and the dramatic?

[First in a series of reading reports, tracing my progress through Jill Roe’s Stella Miles Franklin: A Biography (Pan McMillan, 2008)]

Jill Roe opens her massive biography of Stella Miles Franklin with a simple two page prologue which manages to carry much information lightly. She tells the story of Stella’s mother riding by horse to her own mother’s house to give birth in 1879. In doing so, she maps out the territory of southern NSW which one senses will be essential as the backdrop of Stella’s life. She gives a brief account of Stella’s ancestry by unpacking her name, covering details which could go on for boring pages in a less well crafted biography.

Surely acknowledging the limits of the archives well is a key part of a good biography, and in the prologue the gaps are noted: she took a different route ‘for reasons unknown, possibly to do with the weather’ and ‘it is not recorded whether she was accompanied’. Perhaps these signals can provoke the reader to imagining the scene better and to assuming some responsibility as co-re-creators of the life of the subject as they read.