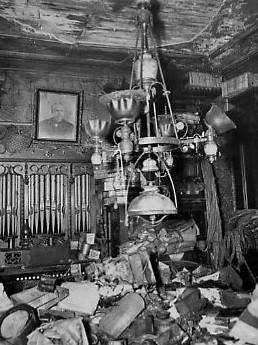 Homer and Langley Collyer were two hoarding recluses who suffered notorious celebrity, at least in New York City, in the 1940s as they fought against the power company, the bank, and the city council. They lived in a large house inherited from their parents and filled it with everything they could get their hands on. Homer was blind; Langley saved years of newspapers in massive piles (‘like cotton bales’ Doctorow imagines) in case Homer ever got his sight back and wanted to catch up on the news. By the end, the paranoid brothers had set traps around the house and could barely move through the narrow passageways between junk. They died within days of each other in 1947 and compulsive hoarding is named after them – Collyer Syndrome. According to Wikipedia, 103 tonnes of rubbish was removed from their house:

Items removed from the house included baby carriages, a doll carriage, rusted bicycles, old food, potato peelers, a collection of guns, glass chandeliers, bowling balls, camera equipment, the folding top of a horse-drawn carriage, a sawhorse, three dressmaking dummies, painted portraits, pinup girl photos, plaster busts, Mrs. Collyer’s hope chests, rusty bed springs, the kerosene stove, a child’s chair (the brothers were lifelong bachelors and childless), more than 25,000 books (including thousands about medicine and engineering and more than 2,500 on law), human organs pickled in jars, eight live cats, the chassis of the old Model T Langley had been tinkering with, tapestries, hundreds of yards of unused silks and fabric, clocks, fourteen pianos (both grand and upright), a clavichord, two organs, banjos, violins, bugles, accordions, a gramophone and records, and countless bundles of newspapers and magazines, some of them decades old.

From such promising source material in the hands of a masterful novelist, Homer & Langley disappointed me. It feels like a novel which never takes off. Narrated by Homer, it is an episodic account of his life from childhood to the late 1970s (Doctorow has the brothers live on several decades longer than they did in real life). A gangster and a group of hippies stay with the brothers at different times, and many others come into their lives for a little time only to leave again. Doctorow doesn’t stay with any of these characters long enough for their interactions with the Collyers to take on enough significance.

The other problem is the first person narration. It doesn’t suit the story Doctorow is telling. We need a narrator who can see the significance and full eccentricity of the Collyers, rather than one to whom their life is insignificant. We need fresh eyes – and Homer has no sight at all – to describe the wonders of the hoarded house.

Perhaps the conflict with the power company and banks would have been more compelling if there was a character representing one of them, an antagonist in ongoing conflict with the Collyers, instead of a couple of faceless stand-offs at the front door.

The charms of this novel are in Homer’s philosophy of the world and his mad projects.

He wanted to fix American life finally in one edition, what he called Collyer’s eternally current dateless newspaper, the only newspaper anyone would ever need. For five cents, Langley said, the reader will have a portrait in newsprint of our life on earth. The stories will not have overly particular details as you find in ordinary daily rags, because the real news here is of the Universal Forms of which any particular detail would be only an example. The reader will always be up to date, and au courant with what is going on. He will be assured that he reads the indispensable truths of the day including that of his own impending death, which will be dutifully recorded as a number in the blank box on the last page under the heading Obituaries. (p.49)

At moments like these, the novel brings to mind Paul Auster and the fascinating life projects of his characters.

I could find only one non-fiction book written about the Collyers; it’s called Ghosty men : the strange but true story of the Collyer brothers by Franz Lidz. 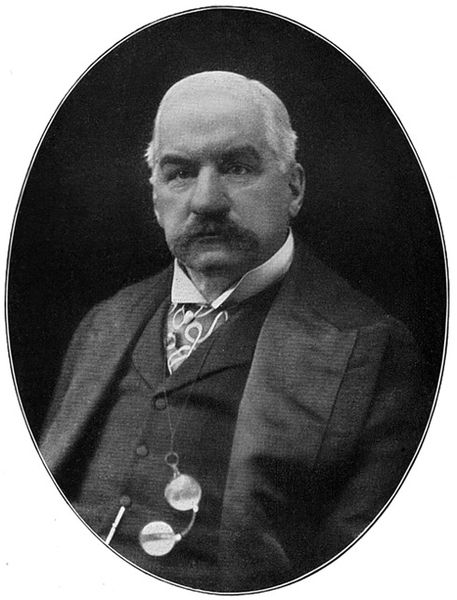 Pierpont Morgan (1837-1913) is a fascinating figure. My interest in him stems from his library of treasures, the Pierpont Morgan Library in New York. But the library, his legacy, is only the last phase in the life of a preposterous man, the king of his milieu.

He was born knowing that he would be ‘great’. His hero was Napoleon and his father was a wealthy industrialist, anticipating his own career.

He began to keep diaries in 1850 – small “Line-a-day” books. Like most masculine journal writers of his time and social class, he was far more interested in registering what happened than in exploring subjective responses or ideas. “Sleighing, skating; beat father in backgammon,” he wrote in early January 1850. The next day, “wound 7 skeins of cotton for mother A man fell off one of the towers of the new depot & killed.” He rarely mentions his siblings. Over the following months he recorded: “Dancing school. Ladies to tea.” “Father did not come home.” “Mother ill.”… “Finished 3rd Book of Virgil. Picked some cherries.” Not even death evoked a comment: “Mr S.B. Paddock [with whom he was living] died at 10 o’clock aged 56. In evening staid home and read.”

What the diaries chiefly portray is a young mind intent on order and control. Next to the day and date printed on each page, Pierpont entered the number of days gone by and remaining for the year – on October first, for instance: ‘Days past, 274.” “To come, 91.” At the end of 1851 he tabulated “Places resided” between January and July – there were seventeen – and the diary pages convering each place. He kept lists of his income, expenses, the initials of girls he liked, and all the letters he sent and received, including postage paid. (38)

I am amazed by the detail of Morgan’s life that Strouse can give us. Most lives do not leave this many traces – childhood diaries, folders and folders of correspondence. There is barely a week of his life that Strouse cannot tell us something about. I compare it to my own family. I know almost nothing of Joseph Hobby, my great-grandfather born in the 1870s, let alone his father, a contemporary of Morgan’s. Not one letter, let alone the detail of a life, the happenings of the days, weeks and months which make it up.

Morgan was involved in some suspicious arms deals during the Civil War, financing the refurbishing of old guns bought cheaply off the army and selling them back at a large profit.

He built up an empire; he had so much money it attracted more money. He came to singlehandedly influence the stockmarket and control investment confidence.

Rhinophyma disfigured his face, a condition in which the nose spreads out red and bulbous. He didn’t want it fixed, superstitiously thinking it would lead to other conditions. He dared people not to stare at it; but he also avoided the public gaze and photographs.

He also lived in the shadow of his father, and it was only when his father died that he embarked with vigour acquiring valuable manuscripts from around the world. He treated with the spirit of competition and acquisitiveness with which he had amassed his empire and soon the basement of his mansion was overflowing with Gutenberg Bibles and rare manuscripts.

In 1906, a library was built next to his house to keep all his treasures. A tunnel connected it to his house. He hired a feisty young librarian who lied about her age and racial background, Belle Costa da Greene, who set about expanding his collection even further.

Hearings into his undue influence over the economy hastened his demise in 1913. He went travelling in Egypt afterwards and slipped into a delusional depression, convinced of conspiracies against him: ‘On the Nile in early February he slid into a delusional depression. He could not eat, had ‘horrid’ dreams, asked constantly about conspiracies, subpoenas, and citations for contempt of court, and felt, reported Louisa, that ‘the country was going to ruin, that his race was run, and his whole life work was for naught!’ (Strouse: 14) His death made headlines around the world. But who has heard of him today?

In his brilliant novel of this milleiu, Ragtime, E.L. Doctorow depicts a fascinating fictional J.P. Morgan. In Doctorow’s account, Pierpont believes himself to be the reincarnation of a special higher class of human, and tries to convince Henry Ford that he is one too. When Ford only partly joins this exclusive club of elites, Pierpont travels to Egypt alone to spend a night in a pyramid. In his absence, the finale of the novel occurs in his library.