My song of the moment is Bill Callahan’s “Small Plane”, a singer new to me. It sounds like a song Leonard Cohen might have recorded between Songs from a Room and Songs of Love and Hate if he had a gentler heart. I was playing it a lot last week in the midst of revising my novel.  It’s a strange song, keeping quite strictly to its subject matter, the memories of flying a small plane with a lover or perhaps a parent. “You used to take me up; I watched and learned how to fly.” It reads as an extended metaphor which never fully declares itself, and thus stays elusive and richer. END_OF_DOCUMENT_TOKEN_TO_BE_REPLACED 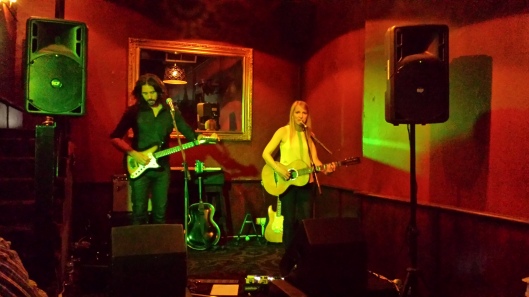 I’ve been finding almost all my music on Radio National’s Inside Sleeve. I assumed my taste was quite broad, and then a reviewer compared the two most different albums I bought all year as being in the same family (those by Lily & Madeline and Luluc). To rework an old joke about country and western, these days I like all three kinds of music – indie folk, new folk, and folk pop. As long as it’s a woman singing, by the look of it. This photograph shows Luluc, who released the widely-acclaimed Passenger this year, playing to an audience of thirty in the Rosemount. I liked being on such intimate terms with them, but they deserve better!

Melbourne’s Laura Jean is very droll and confessional, and likes to sing about kelpies. Her songs are poems. “First Love Song” and “Don’t Marry the One You Love” should be hits.

Days can be filled so easily / With small tasks and pottering / People ask me what I do / I guess now I look after you.

Luluc are a duo also from Melbourne. Their music has a smooth, melancholy beauty.

Your words fall down like water/ Spilling off the page

Soko is French; her music is quirky but also earnestly beautiful, as she pleads and denounces her lovers in her husky little-girl voice.

Diane is a US singer-songwriter, with a country tinge which is under control in this break-up album. I bought it in July, and it has the winter chill in it.

Some things are best if kept in darkness
Only true before the dawn
Ghost ships, silent, deathly sting
Before the canon storm

Williams is a British singer-songwriter who Spotify recommended because I liked Holly Throsby, which is a good comparison. It’s an album ranging across moods and themes, often finding transcendence in the everyday.

I bought Tiny Ruins’ Brightly Painted One just in the last week of the year and it will be bound to make next year’s list, as I like it very much.