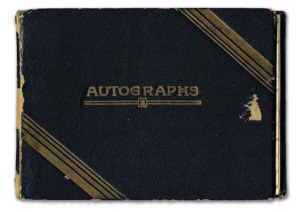 Memory (memories, remembering, memorializing…) is one of the key themes of Alan Hollinghurst’s novel The Stranger’s Child – the presence of the past in the present. It is 1913 in part one, “‘Two Acres’”, and an event occurs which will resonate across the decades in the rest of the book – the young poet Cecil Valance writes a poem, “Two Acres”, in the autograph album of sixteen year old Daphne, a poem which will be quoted by Winston Churchill during World War One and learned by generations of schoolchildren. The idea of an autograph album  is an interesting act of remembering. Daphne and Cecil reflect on it briefly, Cecil remarking on an autograph from a now-dead aviator and Daphne saying in reply:

‘He only sent it to me the week before his propeller broke. I’ve learned that you can’t wait with airmen. They’re not like other autographs. That’s how Olive lost Stefanelli.’ (p. 41)

Cecil remarks that in the light of this story he is anxious and it is ‘rather morbid’ but Daphne assures him that the other autographers are all still alive. His anxiety proves to be well-placed – he will die several years later in the war and the autograph album will be a part of the remembering of him. Equally ‘morbid’ will be the effigy of him built by his mother in the family chapel.

Both Daphne and her brother George had affairs with Cecil; the question of whether Daphne’s was a chaste one or not is never resolved in the novel, but we know George’s was certainly not. Both siblings will reflect in decades to come on the disproportionate attention given to Cecil and the public requirement of remembering him. In part two, set in the 1920s, when faced with the prospect of speaking to Cecil’s first biographer, George reflects:

It was awful that Cecil was dead, he’d been wonderful in many ways, and who knew what he might not have gone on to do for English poetry. Yet the plain truth was that months went past without his thinking of him. Had Cecil lived, he would have married, inherited, sired children incessantly. It would have been strange, in some middle-aged drawing-room, to have stood on the hearthrug with Sir Cecil, in blank disavowal of their sodomitical past. Was it even a past? – it was a few months, it was a moment. (155)

In part four, set in 1980, Daphne says something similar to a friend on the telephone in the midst of interviews with Cecil’s second biographer, ‘Really Cecil means nothing to me – I was potty about him for five minutes sixty years ago.’ (500)

Brushes with celebrity have to be relived over and over, as Daphne’s mother demonstrates back in part one, telling yet again the family anecdote about her encounter with Alfred Lord Tennyson on a ferry while on her honeymoon, with Daphne finishing it off for her; six decades later, Daphne will refer briefly to the same anecdote in the phone conversation previously mentioned. Anecdotes become entrenched and, Daphne reflects in old age,

‘He was asking for memories, too young himself to know that memories were only memories of memories. It was diamond-rare to remember something fresh.’ (496)

Tellingly, Daphne’s own ‘memoir’ is a series of stories about her encounters with famous people.

Memories, Hollinghurst reminds readers throughout the novel, cannot be trusted. In the final section, Paul Bryant disputes Dupont’s description of the colour of Peter Rowe’s Imp, claiming it was beige, not pea-green (541). A trivial difference; but we know that Paul Bryant has remembered wrongly – he notes the ‘pea-green’ Imp forty years earlier (307). If the incident has a function, it may be to call Paul’s memory into question, which is important as it Paul is the one exposing people’s lives as a biographer. Paul’s main source for the tell-all biography of Cecil is Daphne’s brother, George, and his memory is the least reliable of all; he has dementia. Yet dementia makes him extremely candid; unlike the other interviewees, he hides nothing, holds nothing back, telling Paul whatever he remembers. Hollinghurst introduces a further level of unreliability by presenting the interview with George as a diary entry reconstructed from memory by Paul soon after the event; the battery in his tape recorder had gone flat, meaning the interview was not recorded.