Melbourne writer Robert Lukins’ debut, The Everlasting Sunday (UQP, 2018), is an elegant novel about seventeen-year-old Radford’s time at a home for troubled boys in England over the Big Freeze of 1962-1963. He finds friendship and brotherhood there among the other boys and their admired but mysterious mentor, Teddy, as the life of the home begins to fall apart. The novel is cinematic in its sumptuous visual narration, which is in tension with its careful avoidance of explanations. Even when we’re inside the head of Radford, we only see glimpses. This restraint gives the novel some of its distinctive tone; it is beautifully written. Perhaps its flipside is that the more dramatic events of the narrative took me too much by surprise – was the narrative working with a different logic to what I was used to, was it the fault of a somewhat lazy reader (quite likely), or could it have been strengthened by some foreshadowing or other changes? Setting the novel over the big freeze was a superb choice with its symbolic resonances and the way it gives a timeframe, a clock ticking over the course of the freeze as the characters – and the reader – wait for the inevitable thawing. It doesn’t read like a first novel and it’s probably not; ‘assured writing’ Lucy Treloar claims on the cover, and I agree. It’s also wise and haunting. I came to this novel through Lukins’ inspired Twitter presence; it’s not necessarily the tone or type of novel I expected from his tweets, but it’s every bit as good as I hoped.

My friend Laurie Steed’s debut, You Belong Here, has just been published. It stretches from 1972 to 2015, beginning when two baby boomers fall in love and finishing with a poignant epilogue chapter from their first grandchild, but at its heart it’s a novel about Generation X, that forgotten generation that no-one seems to have talked about since the nineties. He-man toys in childhood, PJ Harvey on the stereo; reading it is a welcome respite from an internet world as the three Slater children – Alex, Emily, Jay – grow up on lolly bags at the deli, cricket and VHS at the end of the twentieth century. END_OF_DOCUMENT_TOKEN_TO_BE_REPLACED 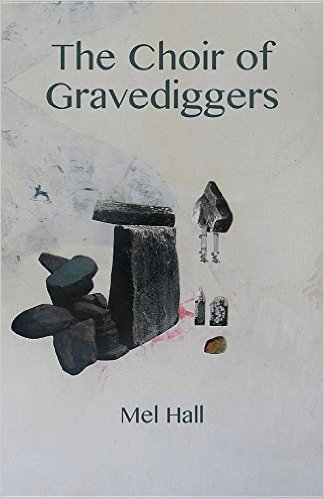 Any novel under 70,000 words tends to get called a novella, which I think is a misnomer. The true novella – say, 15,000 to 40,000 words – is a rare beast; publishers won’t tend to touch it, despite the fact it has the reading time roughly equivalent to watching a film. Kudos, then, to Ginninderra Press, an independent Adelaide-based publisher, who have published a true novella in The Choir of Gravediggers, 48 pages long, by my friend, the Western Australian Mel Hall.

The Choir of Gravediggers has a frame narrative – a kind of biographical quest – as the narrator looks through the documents and photos that remain of her flamboyant father, Charles Truelove, who ran the St Kilda Cemetery and a choir at the turn of the twentieth century before being plagued by scandals and disappearing. Choir has a zany, engaging narrative voice, by turns poetic, inquisitive, elegiac. Mel’s historical research is worn lightly, making the narrative sparkle with authentic detail as she evokes historical Melbourne. Choir compresses a big story into a small book. This reader would always rather a book which leaves too soon than one which stays too long, though it might be that this is one narrative suited to a 300 page novel. (As a defender of the novella form, I do hate to say this!) An afterword reveals the strong historical basis for the work – Charles Truelove was a historical figure; indeed, he was Mel’s great-great grandfather. 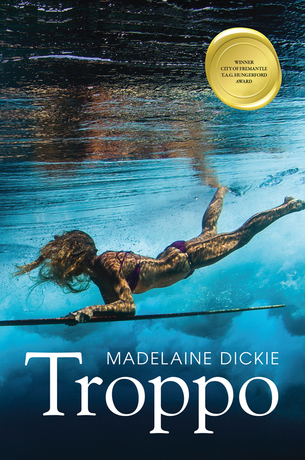 I had the pleasure of meeting Madeline Dickie at the TAG Hungerford Award ceremony in March last year. It turns out she’s a good friend of a school friend of mine. She was announced as the winner that night and I’ve been looking forward to her novel coming out since.

Troppo’s first person narrator is Penny, an Australian in her early twenties who’s returned to Indonesia escaping the boredom of her career-focused older boyfriend, Josh, and the sterility of life in Perth. She lives for surfing, adventure, and the excitement of new people. “Risk,” Penny writes, “always make things sharper, throws into contrast the highs and lows, gives clarity. As a surfer, I know this, I’ve lived this. Living in Perth, like a sleepwalker, I’ve missed this.” Penny is drawn to a new man and is torn between her attraction to him and her loyalty to Josh. At the same time, she’s about to begin a new job at a resort run by Shane, an expat with a reputation as a psycho whose business is the focal point of growing tension between the “bules” and the locals. END_OF_DOCUMENT_TOKEN_TO_BE_REPLACED

Compulsory reads can be a chore but just as often they lead to wonderful discoveries. I’m so glad I’ve been pushed to read  American writer Jennifer Egan’s A Visit From the Goon Squad (2010), a set text for the first-year fiction unit I’m tutoring this semester. It’s a brilliant novel about youth and middle age, success and failure. It’s spread across a canvas of American characters between the 1970s and 2020s, all of them with some connection (or two degrees of separation) to music publicist Bennie. In the first chapter, focused on Sasha, her friend Rob who drowned in college is mentioned in passing. I thought nothing of it at that point, but chapters later we read his story, this character who is just a sentence in the first chapter. In ways like this the novel gives a sense of the poignancy of all the remembered (and forgotten) people and events in any one’s life. It’s a novel which expands our appreciation of life, going beyond initial viewpoint characters and their present to reveal the past and future and inner lives of other characters. The title might have put me off reading it, but it turns out to be so appropriate – a character reflects midway through that time is a goon who comes along and beats you up. The narrative voice reminds me of Jonathan Franzen; its also the same milieu. The approach itself – linked, self-contained stories – must be emerging as a genre in its own right; off the top of my head, two other works I love have used it – Tim Winton’s The Turning (2005) and Kevin Brockmeier’s The Illumination (2011) – and my friend Laurie Steed has a manuscript which will join this club when it’s published. (I remember some earlier examples – Ray Bradbury’s Martian Chronicles and Thomas M. Disch’s 334, John Updike’s work – but I’m wondering if it’s becoming more common, and also feel there’s an increased element of design and effect of the whole in these recent examples.)

It turns out my favourite novel of the year is the last one I will read in 2014, Christopher R. Beha’s What Happened to Sophie Wilder? (2012). (Imagine if your entire life worked out like that, and your greatest reading experience was on your deathbed? You would give new meaning to that cliche of not wanting to finish it, because once it was finished, you would be finished.)

It is the story of a talented writer in her twenties, Sophie Wilder, told by her lover, Charlie Blakeman. It creates a curious and often beautiful effect when a novel is narrated by the secondary character – think of Ford’s The Good Soldier –  and this novel does it so well in trying to answer the question posed by the title. Sophie is a tragic character to break a reader’s heart – and Charlie’s; she is a mystery to everyone, and untameable. She lives by her own code of authenticity, a dedicated and brilliant writer through her college years, only to make an unexpected conversion to Catholicism which comes to define her life. She comes in and out of Charlie’s life, forming him as a writer in their college years, only to leave him and marry another.

I have been trying to find the right set of comparisons to situate it as a novel. I thought of the elegant tale of a similar milieu in Donna Tartt’s The Secret History. I thought of Paul Auster’s world of orphans who make similarly mysterious lives for themselves. And finally, after I finished, I realised the most important point of comparison was Graham Greene, particularly The Heart of the Matter. It is a religious novel in the same way Greene wrote religious novels – with tragic religious dilemmas at their heart. This one occurs with Sophie taking on the care of her dying father-in-law. To contrast another religious writer, Marilynne Robinson would have written about this with a sense of grace triumphing even through tragedy. Not Beha; like Greene, the Catholicism of his novel is bleakly beautiful and tastes, ultimately, of death.

(Thank you to Simon Cox for putting me onto this novel, which I probably wouldn’t have encountered otherwise.)