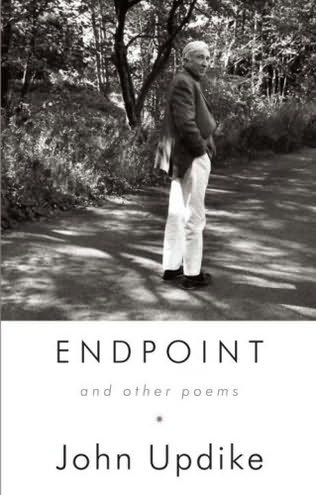 Reading John Updike’s final book, a collection of poems, is like receiving a dispatch from the afterlife.  The poems take us nearly up to the point of his death from lung cancer in January this year. He sent the manuscript off and then he died.

The cover photo has a poignancy to it, with its spontaneous, snapshot quality, the sombre ordinariness of it in its black and whiteness, and the sense that John is about to head off down a path we can’t follow him down, not yet.

The collection starts with the ‘Endpoint’ sequence that takes us through each of his last birthdays, starting with his seventieth in 2002, and then into his diagnosis and swift death. His thoughts range across his life, from childhood to old age, as he reflects on mortality, aging, memory. In 2005 he writes

A life poured into words – apparent waste
intended to preserve the thing consumed.
For who, in that unthinkable future
when I am dead, will read? (p.8)

In hospital, having learnt of his death he writes:

Must I do this, uphold the social lie
that binds us all together in blind faith
that nothing ends, not youth nor age nor strength,
as in a motion picture which, once seen,
can be rebought on DVD? My tongue
says yes; within, I lamely drown. (p. 23)

His final reflections are baldly honest.  His poetry is less ornate than his prose, and it makes him seem more vulnerable, frail. He has let me in on the final secret journey he took, which I only learned he had taken when his death was announced that hot, hot January day.

After the ‘Endpoint’ sequence, are pages and pages of other poems, as if to say John is not really dead, as if to say he’s still alive like he should be, like I thought he would be.