Katharine Susannah Prichard spent the 1940s working on her Western Australian goldfields trilogy, which finally appeared as The Roaring Nineties (1946), Golden Miles (1948), and Winged Seeds (1950). It’s a saga that tells the story of the development of the goldfields through the fortunes of one family, and interwoven with folklore, historical events, and technical descriptions. It is Katharine’s attempt at writing faithful to her communist convictions, bearing the influence of reportage and socialist realism. Yet it’s also faithful to Katharine’s recurring literary interests in industries, regions, and group narratives. It is a decisive turn away from her experiment with modernist interiority in her novel of middle-class marriage, Intimate Strangers, drafted between 1929 and 1933 and published in 1937.

It was an ambitious project, and at the time the reviewers focused more on its failings than its successes. It’s true that Katharine’s politics and research are sometimes intrusive, but it is also a poignant and tragic saga that evokes very well an industry and a place and the changes over the years. Katharine reacted to the negative reviews by discounting Australian critics altogether and maintained the trilogy was the high point of her ouevre.

Katharine had been at the vanguard of Australian writing and she now found it hard to be striking out in her own direction, largely alone. She read Patrick White’s Tree of Man in 1957 and was excited by it, even though she disliked the focus on ‘moronic types’. Yet as Patrick White and Randolph Stow were proclaimed by some as Australia’s first great writers, Katharine felt she and her generation were being neglected. By 1964 she had turned decisively against White writing, ‘Lost in the fog of their own delusions, writers like Patrick White believe they are uncommitted to any social purpose, while, as a matter of fact, they serve the causes of obfuscation and the defeat of human dignity in its demand for truth and justice.’

After World War Two, Australia changed in ways that left Katharine alienated and sad. She had long wanted Australia to have cultural independence from the United Kingdom, but it didn’t go the way she hoped. Her hopes were for an Australia sympathetic to socialism and proud of its progressive history and its love of the bush. Instead, she witnessed with horror the pivot toward the USA, the rise of consumerism, the long Menzies government, and increased urbanisation. In my forthcoming biography of Katharine, I look at the 1950s in her life as a time of frustration, with false literary starts, an autobiography which wouldn’t write itself, and her feeling of stronger identification with the Soviet Union and its people than an Australia which had changed in one direction as much as she had changed in another.

Writing NSW is honouring Katharine Susannah Prichard this month, the seventh writer in their annual celebration of our Australian literary heritage. Why read Prichard in the year 2020, fifty-one years after her death? I want to answer that by focusing on the joys her work can bring us today. This reading list accompanies the first video I made with Writing NSW for the celebration, which will be streaming on their site from 9 November 2020.

END_OF_DOCUMENT_TOKEN_TO_BE_REPLACED

The first thing I did when I started writing a biography of Katharine Susannah Prichard was to read all of her novels, roughly in order. I even found a rare copy of her rarest novel, Windlestraws (1916) at just the right time. But I didn’t find a copy of her second rarest novel, Moon of Desire (1941) – at least not at a price I wanted to pay – and so it languished unread, as I marched on with other more pressing things. She rated it lowly herself, explicitly writing an action-filled romance when she was short of money in the hope of it selling well and being optioned as a Hollywood film.

END_OF_DOCUMENT_TOKEN_TO_BE_REPLACED

Tomorrow, 2 October 2019, is the 50th anniversary of the death of Katharine Susannah Prichard. I’m tweeting about it this week from https://twitter.com/nathanhobby using the #KSP50 hashtag.  Here’s a thread I tweeted:
Commemorate #KSP50 by reading one of Katharine Susannah Prichard’s best stories on @TroveAustralia (in no strict order):
1. The Kid (1907) – a gothic bush story, written the year her father killed himself. I think it’s the best of her early work.

The Kid. [FOR THE BULLETIN.] – Version details The Kid. [FOR THE BULLETIN.] babe was dead. The Kid stood and gazed at him. It had been raining heavily. Her thin slurts were drenched with rain; her hair, all wet, knotted and lank, hung over her ..… https://trove.nla.gov.au/version/258015459
2. Christmas Tree (1919) – the first story she wrote in Western Australia, after traveling out to her husband’s struggling farm in the Wheatbelt. It’s one of the most successful integrations of politics in her oeuvre.

The Australasian (Melbourne, Vic. : 1864 – 1946) – 20 Dec 1919 – p51 ORIGINAL POETRY.; THE STORYTELLER.; BUSH SKETCHER.; Advertising; https://www.nla.gov.au/nla.news-page11770275
3. Buccaneers (1935) – a light-hearted, gently humorous story of middle-age which evokes WA’s Rottnest Island superbly. It’s amazing that she wrote this soon after the suicide of her husband, Hugo, and while flat out for the Communist Party.

Lisa Hill of ANZ Litlovers has reviewed Katharine Susannah Prichard’s first novel The Pioneers as part of Australian Women Writers Generation 2 week, co-ordinated by Bill at The Australian Legend.  Lisa quite rightly points to the influence of the romance genre on it and the silence on Aboriginal issues, especially as the South Gippsland area saw significant massacres. Perceptively, she writes, ‘So while the story does feature the obligatory bushfire, clearing of the land, home-building and the planting of subsistence crops, plus a proud declaration that It’s all ours, this land about here, the focus of KSP’s theme is redemption and the creation of a new society in which there were second chances for people who had fallen foul of unjust laws.’ It’s an interesting book for a number of reasons, from its depiction of colonial Australia to the developing voice of Katharine at the beginning of her career. It probably sold more copies than any other in Katharine’s lifetime but does not have the enduring literary interest of her best work.  The Pioneers was the first book I read as I contemplated taking up the KSP biography back in January 2014; I wrote about it here and here.

The ad for the performance Katharine attended on 5 September 1927. (Swan Express, 2 September 1927, 5). I really like the warning about leaving things in your  motor car.

This month I’m writing the circus chapter of my Katharine Susannah Prichard biography, chapter 24 in the current structure. It’s focused on the writing and reception of her novel Haxby’s Circus (1930). The novel was written at the end of her five year creative peak from 1924 to 1929 and is usually regarded as one of her better novels but less accomplished than the other two novels of this period, Working Bullocks (1926) and Coonardoo (1929). Whatever its flaws it’s an engaging and moving novel. I reviewed it in July 2014, writing that it ‘has the most powerful scenes I’ve yet encountered in KSP’s work, scenes of beauty, darkness and insight’. More recently, Lisa has reviewed it on ANZ Litlovers.

It’s a pity that the edition reprinted several times has always been the British one. The American edition, Fay’s Circus (Katharine’s original title) – published a year later – contains an extra section of 9700 words which scholar Carol Hetherington believes resolves the structural flaw late in the novel. Katharine was writing for a competition deadline and her sick child meant she didn’t write this section as planned in the first version. (Carol Hetherington, ‘Authors, Editors, Publishers: Katharine Susannah Prichard and W.W. Norton’, Australian Literary Studies 22, no. 4 (October 2006): 417–31.) END_OF_DOCUMENT_TOKEN_TO_BE_REPLACED 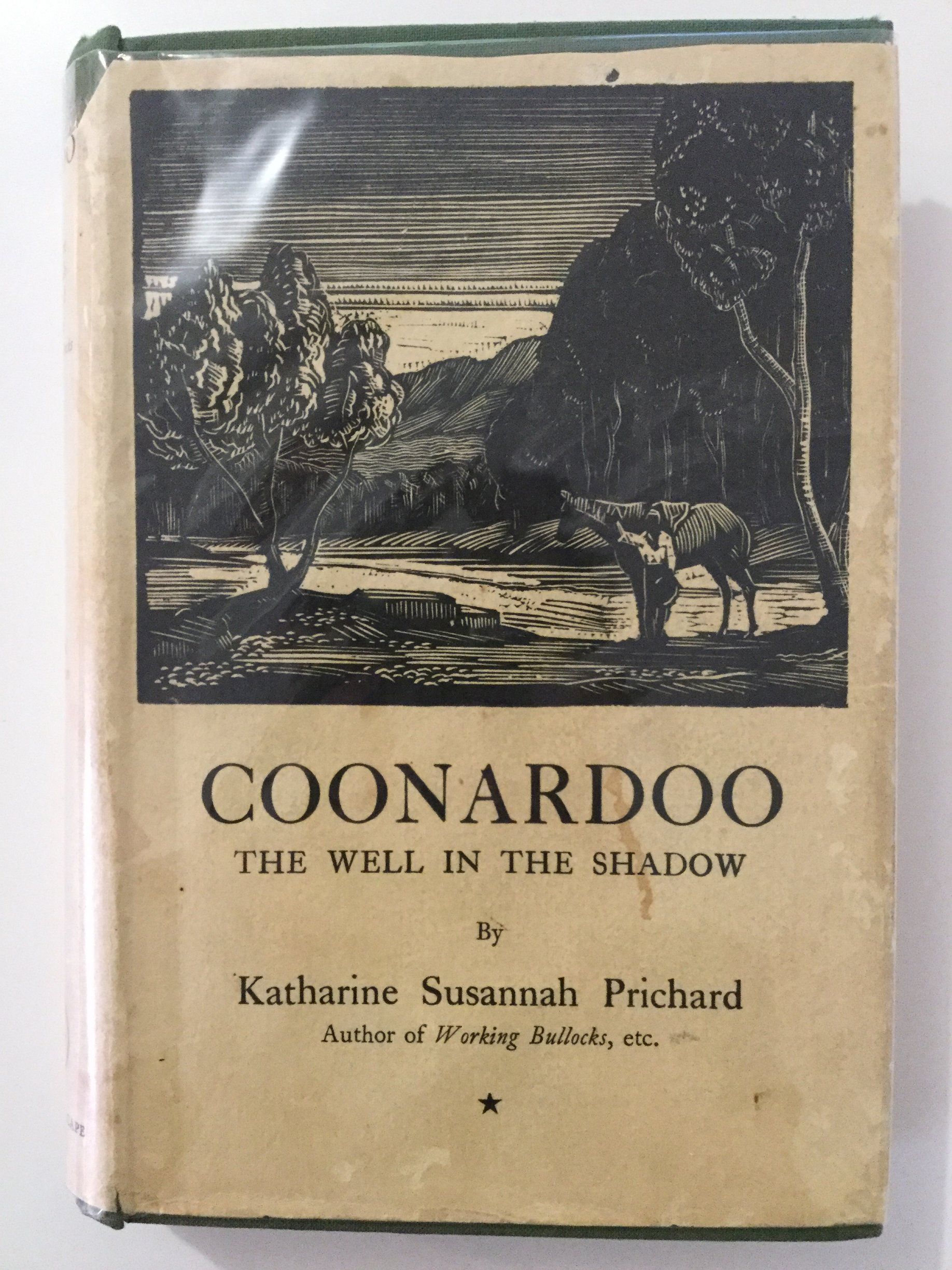 I reviewed Katharine Susannah Prichard’s Coonardoo back in 2014 and stand by most of my comments. I’ve just finished re-reading it, and want to add some further thoughts.

It’s inevitable that literature is read in terms of its social relevance, praised or blamed for its handling of issues that matter to us as a society now. It’s one of the functions of literature, and it’s a significant one, but it shouldn’t be the only one. It’s a two-edged sword, of course. When Coonardoo was serialised in the The Bulletin in 1928, some readers wrote in angrily about the fact it depicted miscegenation between whites and Aboriginals. (This is an oft-repeated statement; if I get time I’d like to get behind it and see if these and other negative reactions are preserved in the archives anywhere – certainly not in KSP’s papers.) Later, Coonardoo was praised for its progressiveness in representing Aboriginal characters more fully. END_OF_DOCUMENT_TOKEN_TO_BE_REPLACED 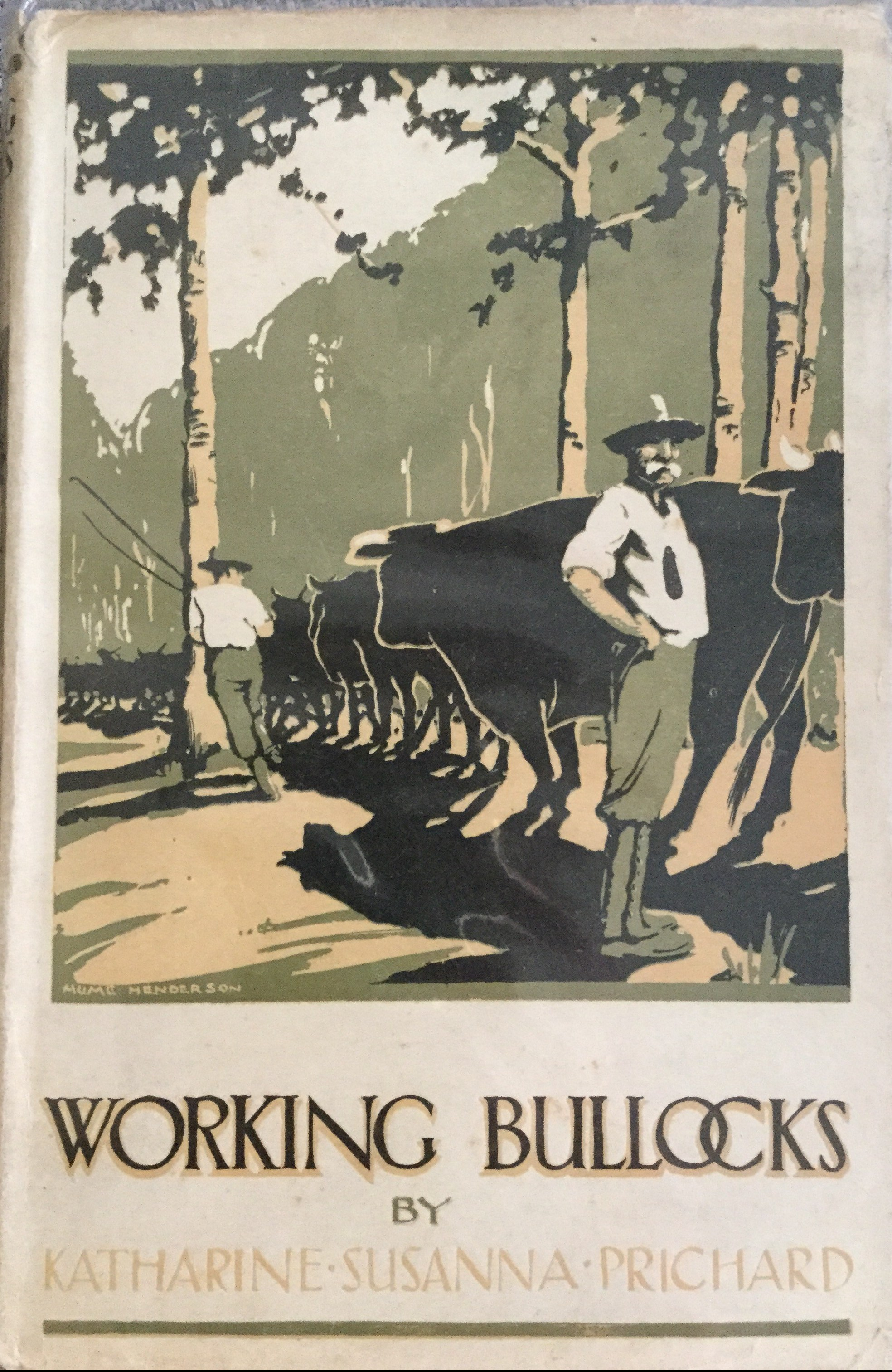 I reviewed Katharine Susannah Prichard’s fourth novel, Working Bullocks (1926), three years ago, and after reading it again, I largely agree with my first reading. It’s the story of the people of the timber country in the South-West of WA and follows a young man named Red Burke who has a way with horses and bullocks but not people, as he is torn between two women and struggles to make his way in that world. I have some new reflections – mostly biographical – to add: END_OF_DOCUMENT_TOKEN_TO_BE_REPLACED

I wrote a short review of Katharine’s 1948 novel, Golden Miles, for my monthly column in the KSP Writers’ Centre newsletter and it’s now up on the centre’s website.

Katharine Susannah Prichard published two books in the 1950s – Winged Seeds, a goldfields novel, at the beginning of the decade in 1950, and N’goola and Other Stories at the end of the decade in 1959. It was a difficult decade for Katharine -she felt the sting of Cold War persecution as a Communist; her health was poor; her only son was living overseas and then interstate; and the writing projects she had envisaged in 1950 did not work out how she hoped. N’goola brings together this decade of troubled writing. There’s much in it which surprised and interested me. END_OF_DOCUMENT_TOKEN_TO_BE_REPLACED