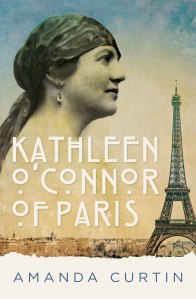 Years ago in her story “Paris Bled into the Ocean” Western Australian writer Amanda Curtin fictionalised a legend about the artist Kathleen O’Connor throwing her own paintings into the sea at Fremantle when she couldn’t pay the import duty on them. Fremantle Press suggested she write a book about O’Connor and for it, Curtin has turned from fiction to biography. O’Connor (1876-1968) is a difficult subject. She was a private person, revealing little of her inner or personal life in the papers she left behind. The recollections of those who knew her best suggest she was a mystery to them, too. In these cases, writing a subject’s life as a biographical quest—as Curtin has done—is often the best choice. Curtin walks in O’Connor’s footsteps, from New Zealand where she was born, to Perth where her father, the famous engineer killed himself in 1902, and to Paris, her spiritual and artistic home. ‘I am looking for Kate in this place where she was born. There may be little, or nothing, to find but I have come to believe that people leave traces of themselves in the places they inhabit; that they can carry those places with them forever. It’s a familiar method of research for me—an alchemy of the physical and the instinctual.’ (22) Curtin is unintrusive, alluding to echoes of O’Connor’s life in her own but never taking the focus away from O’Connor and the quest for traces of her.

Summing up O’Connor’s career, Curtin writes: ‘the evolution of Kathleen L. O’Connor, artist, took her from impressionism and post-impressionism to the decorative style of the 1920 from ‘slightly abstract seeing’ to the portraits and flowers carved from oil with a palette knife—‘an amazing evolution of forms and ideas over a long painting lifetime’. (268) Biographies of artists present their own challenges and opportunities. The artworks themselves can be presented to the reader in the pages of the book, while in the case of literary biography a potential reader might feel they need to have read the writer’s work before reading their biography. In O’Connor’s case, there are many lost works and much confusion around titles, which she changed over time—it’s often not possible to even know if it’s the same painting referred to in the past. The fate of the paintings themselves forms an intriguing part of the story. The story of In A Bohemian Atmosphere, as a key example, is given its own short chapter as the work was painted in Perth in 1928, travelled to Paris, returned to Australia in 1948, retitled Pack of Cards and Copper Jug, bought by Claude Hotchin and donated to a rural Western Australian shire. Stolen in 1972 and hidden in an abandoned house, it was discovered the next year and eventually returned. During restoration a decade later, another painting was discovered on the back and an ‘intricate process’ managed to successfully split the hardboard into two paintings.

A biographical technique I admired in this book was the juxtaposition of multiple quotations from difference sources about a topic—so, for example, four descriptions of O’Connor’s West Perth studio (238), add up to a fuller, multi-angled picture.

The respectable studio was remembered by many:

[It was] a couple of steps down, a little closed in verandah where she had her easel painting sunflowers…

It smelled of turps and there was a heavy pall of cigarette smoke.

There was a blanket up at the window—she couldn’t afford curtains.

Lots of paintings, all for sale, were strewn around the flat, on the floor and propped up against the walls.

Rather than try to weave them together and/or explain who gave those descriptions, they’re perfectly pared down and allowed to sit together, each with a footnoted reference for those wanting to follow up.

O’Connor and the subject of my own biography, Katharine Susannah Prichard, were contemporaries. During her research, Curtin kindly sent me a 1960 letter from Prichard to O’Connor that she found in the archives; Prichard was politely declining a  request from O’Connor to sit for a portrait. It’s an intriguing ‘what-if’ moment—the portrait would have been an interesting interpretation of Prichard, not to mention the interactions between the two. Both the divergences and convergences between the two women are enlightening. In their twenties, both had their lives upended by the suicides of their fathers. Reading of the struggles O’Connor faced in making a living as an artist, I was reminded that Prichard made life twice as hard for herself in also becoming a political activist. Just attempting one of these things in life can be overwhelming, but after being immersed in Prichard’s life I found myself surprised and perhaps even disappointed in O’Connor that the events she lived through didn’t stimulate any apparent political responses from her. Yet in remaining apolitical, O’Connor is a less problematic figure than Prichard, whose communism led her, eventually, to an abhorrent loyalty to Stalin. Both women felt they had to prove themselves abroad at the beginning of their careers. But while O’Connor was not fond of Australia at all, Prichard’s Australian identity was central to her life and work. They represent different responses, different choices in the same milieu.

Kathleen O’Connor of Paris is an accomplished biography combining the skills of a fine novelist with a determined, deep researcher. It succeeds as the story of an interesting woman’s somewhat opaque life while using the gaps and limits of knowledge about O’Connor to reflect on our relationship to the past and to the dead. As Curtin remarks in her conclusion, she was surprised to find that she ended up ‘[w]riting about the the things that will always preoccupy me: loss and redemption, what we inherit from the world, what we leave behind of ourselves in a world without us in it’.

6 thoughts on “Kathleen O’Connor of Paris”