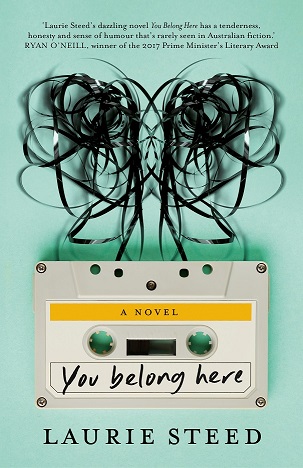 My friend Laurie Steed’s debut, You Belong Here, has just been published. It stretches from 1972 to 2015, beginning when two baby boomers fall in love and finishing with a poignant epilogue chapter from their first grandchild, but at its heart it’s a novel about Generation X, that forgotten generation that no-one seems to have talked about since the nineties. He-man toys in childhood, PJ Harvey on the stereo; reading it is a welcome respite from an internet world as the three Slater children – Alex, Emily, Jay – grow up on lolly bags at the deli, cricket and VHS at the end of the twentieth century.

The novel begins in Melbourne and I feared Laurie had been forced to relocate the action. Coming out with local publisher Margaret River Press, I shouldn’t have worried; in chapter two, the parents, Jen and Steven, move to Perth and, except for a detour to Albany in one chapter, the action stays there. Specifically, it’s a Mt Lawley novel, lovingly evoking the Beaufort Street precinct of the eighties and nineties, moving as far as Inglewood Oval with forays into the city, including, in a neat echo, two scenes of different generations in King’s Park. It captures a moment of change: ‘yuppies moving in, swallowing souls with their renovations and extensions’ (97). This is a book which shows the potential of inner-suburban Perth as a setting, an antidote to too much beach and river in Western Australian literature.

During a talk at the Perth Writers’ Week, Laurie revealed the working title had been ‘You Don’t Belong Here’. It was a brilliant move to retitle it as he did; the final title captures the experience of being family, even a dysfunctional one. Belonging is complicated and the novel charts the Slaters’ struggles with each other and with life and their imperfect attempts to heal after the divorce that damages them all so badly:

‘It’s often lonely,’ said Jay, and she felt that too, and it wasn’t the city, the weather, or the shape of their world, but a feeling they’d found deep in the family DNA. (131)

You Belong Here was originally envisioned as a linked short story collection. Its origin shows in the gaps between chapters and the generally compressed timescale of each chapter. It’s an effective structure for this family chronicle, as the narrative moves across decades in a series of crucial scenes. Laurie wrote an interesting post on the adaptation process here.

The novel is dialogue-heavy, and the conversations carry the awkwardness and repressions of the characters, as they evade what they really want to say and often cloak their words in sarcasm and teasing. Laurie also pares back what he reveals on the page and allows much of the action to happen off the page, and so we’re left with the aftermath or the anticipation. Two chapters in the middle are particularly strong, ‘The Knife’ and ‘Half-Life’, using these techniques to powerful effect.

It’s been a long journey for Laurie to reach publication day, and I’m so pleased to see this book released into the world. He’s been a generous and patient mentor and teacher to many, contributing to the writing community significantly both here in Perth and Melbourne. Ryan O’Neill calls You Belong Here ‘tender’ on the cover, and he’s right. It tenderly gives literary shape to normal lives: the small-scale tragedies, long-running family feuds, the fleeting moments of joy, and the boredom and confusion.  It’s a rewarding novel-in-stories, capturing both Generation X and Perth in phases of their life now lost.

Lisa and Amanda have both also written about You Belong Here.

11 thoughts on “A generation X family chronicle: You Belong Here by Laurie Steed”