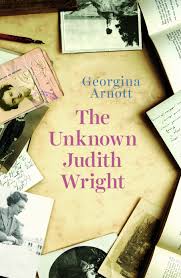 Georgina Arnott’s The Unknown Judith Wright examines the first twenty-one years of Wright’s life. It reveals crucial aspects of the Australian poet’s life which have been obscured or misrepresented, particularly in the one full-length biography of Wright – Veronica Brady’s South of My Days (1998)  – and in Wright’s memoir, Half a Lifetime (1999). The first half of the book focuses on Wright’s ancestry and childhood. The second half focuses on Wright’s university years and their formative influence, downplayed by Wright and Brady. “The thrust of the Judith Wright life narrative, told with small variation by the subject herself and Veronica Brady,” writes Arnott, “is so strong that aberrant details, counter winds and inconsistencies have had a way of being left out.” (149) Arnott gets the tone just right in approaching the previous auto/biographical work on Wright. Even though she offers a significant reinterpretation of Wright, she does so with an obvious respect for the poet and not in a spirit of attack but of patient scholarship.

The Unknown Judith Wright is biographical without being a biography. It’s a distinction I’ve been wrestling with while reading it. Even though it gives an outline of all the key events and background of Wright’s childhood and youth, each chapter is making a case for a particular thesis rather than being narrative-shaped. The biographical criticism Arnott practices in this book is shaped around questions each chapter sets out to answer. It strives for clarity stylistically and logically, bringing the reader along as the case is built. There is still a sense of story, but it’s secondary to the argument. Of course, that’s the nature of academic writing, and it’s consistent with the book’s origins as a PhD thesis. (It’s not entirely clear how much the book has been revised from the thesis. The 2012 thesis is not available online to compare [abstract here]; this in itself suggests they are not too different, as commercial publication is one reason to delay the digital release of a thesis.) The approach taken is the way I imagined I would be pushed to shape my own PhD on Katharine Susannah Prichard if my biography wasn’t a creative work, allowing me to make narrative primary.

PhD theses are required to create new knowledge and perhaps consequently the book focuses only on elements of Wright’s biography that have been misrepresented, unexplored, or obscured. It builds on and corrects existing works. This allows Arnott to examine these aspects with a level of detail that wouldn’t be possible even in the lengthiest of biographies. It also means the book is to be read in conjunction with those other texts. A general reader looking for the story of Wright’s early life may be disappointed, as much as they will find many things of interest in it.

Arnott has a Master’s degree in literary studies but wrote this book as a doctorate within the discipline of history. In the final chapter, questioning why no-one has attempted to recover the lost university poems of Wright before – one of the key reveals of the book – she writes: “Perhaps, in the end, the situation reflects the traditional delineation between literary studies and history, which has deterred literary scholars from archival research and historians from investigations into poetry.” (240) I think literary studies would benefit greatly from far more attention to the archives, even if interpreting literature historically and biographically is suspect for many literary scholars, from New Critics to literary theorists.

One of the achievements of this book is to give the reader an understanding of several periods of Australian history through the focal point of Judith Wright and her ancestors. I gained a better knowledge of the squatters in New South Wales and the history of New England; the displacement of Aboriginal Australians; and inter-war academic life in Sydney. Arnott balances the big and small elements of the picture very well.

The Unknown Judith Wright is the sort of book we need more of – a carefully researched account of an Australian writer that sheds new light on their life while not setting out to tear them down, bringing together in one author the skills of the historian and the literary critic.

5 thoughts on “The Unknown Judith Wright”