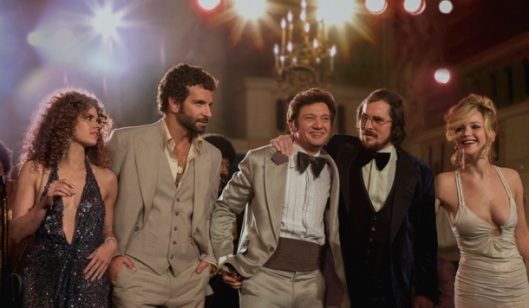 1. American Hustle – a film of surprises, lit up by Amy Adams’ performance, with a script which knows how to use the conventions of drama while also being fresh and strange. The playful evocation of the seventies fascinated me.

2. Lincoln – the sort of serious drama I appreciate more and more as I get older. Review here.

3. The Great Gatsby – I thought at first the drama would be lost in the glitz, but in the second half, the film hits hard. Particularly devastating for me is the realisation that Daisy is not a good person.

4. The Turning – the adaptation of Tim Winton’s short story collection (my favourite work of his) misses the connections between the stories because each story is individually adapted by different creative teams, with different actors for the same characters. But this is also the film’s strength, a kaleidoscope of Australian talent around the theme of remembering the town you grew up in from middle age.

5. Mystery Road – this film noir set in the Australian outback makes my list on the proviso that I understand the ending next time I see it, because I was just confused. But it is an atmospheric clash of genre and setting as an Aboriginal detective returns to the town he grew up in to solve a murder mystery.

1. Safety Not Guaranteed – a quirky drama-comedy about a reporter and his two sidekicks who go to answer a classified ad looking for people to accompany a time-traveller. It’s not about time travel at all; it’s about outsiders finding meaning in life. It stars one of my favourite TV actors (Aubrey Plaza) and is a surprise delight.

2. Seeking a Friend For the End of the World – a film which shares some of the same tone of Safety Not Guaranteed. It brings together two wonderful actors – Keira Knightley and Steve Carell (US Office) – wondering what to do when there’s only a couple of weeks left to live. It’s dark but funny and made me cry. A lot of critics didn’t like it; I respectfully disagree.

3. The Immaculate Conception of Little Dizzle – this is one of the strangest films I’ve ever seen, and makes it on the list for being so bewilderingly interesting. My wife saw it on the videostore shelf and thought it worth trying; I’m glad of her serendipitous find. It’s like Fight Club meets David Cronenberg. After becoming addicted to experimental cookies discarded in a lab, an anarchist cleaner obsessed with the meaning of life gives birth to a blue fish creature. Obviously not a film for everyone. Unfortunately, it ends suddenly and unconvincingly, but even that’s part of the charm – like a dream which you suddenly wake up from.