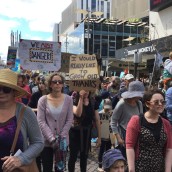 It was humbling to be led by school students, born this century, in the Global Climate Strike on Friday. But also inspiring. The turnout in Perth was estimated at 10,000, and Forrest Place was filled to the brim. Even this impressive turnout was overtaken by smaller cities, Hobart and Canberra, but that’s just a sign of how big this day was, how many people are concerned enough to make a stand.

You don’t know what’s going on when you’re in the middle of a march. After the speeches, we walked through the pedestrian mall, dwarfing the few shoppers who were on the sidelines visiting the struggling shops. ‘No more gas, coal and oil, Keep the carbon in the soil,’ we chanted. At the main street, St George’s Terrace, a line of police blocked our way. Suddenly marshals were gesturing at us to sit down on William Street.

We were outside the Anglican high-rise school where students held signs to the window saying, ‘We can’t come’ and ‘We support you,’ while the principal looked down at us from his office. I gestured at him to come and join us. As an Anglican, I say shame on the school if students were indeed not allowed to attend the protest.

According to what other protestors told me, one of the mining companies had requested the police block our planned route which would have intentionally passed their headquarters. Didn’t they want the “optics” of their green-washed credentials challenged by a bunch of determined strikers?

I love Perth, but it’s  a conservative city, dominated by bogans, and ruled by a coalition of SevenWest media and mining companies. SevenWest now owns the daily newspaper, The West Australian, and The Sunday Times, and the most watched news bulletin on Channel 7. Their editorial line is uniformly hostile towards climate protestors. They accuse us of hypocrisy, of alarmism, of brainwashing children. I hate the sway they have over the public. I hate the lie that they are the voice of reason and moderation, when science and our own eyes tell us we are in a crisis and government and industry have failed to address it. It is so easy to sneer at protestors, but it’s actually never the easy option to protest.

I don’t like disrupting ordinary people trying to go about their business; I know it’s frustrating. But we need to disrupt business as usual because business as usual has got us to where we are. There’s hard days ahead. This Australian summer is going to be long and hot and, for some fatal. We need to make lots of noise, lots of disruption, every person on the streets until the Coalition and Labor get serious about climate action – and ultimately, until we collectively restructure our society and our economy into a sustainable one.

7 thoughts on “Perth School Strike For Climate: notes from the middle of the crowd”