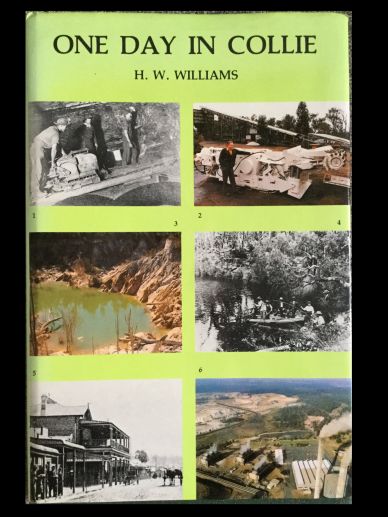 I spent my childhood, from ages two to fifteen, in Collie and it seems like a dream. I’m not really in touch with anyone who lives there and I’ve only returned a handful of times. The rest of my family lives only fifty kilometres west in Bunbury, but there’s no passing through Collie; it’s not on the way to anything else. It’s a coal mining town in a valley, surrounded by bush on all sides.

I remember One Day in Collie by H.W. Williams sitting on display in the Collie Public Library. I picked it up a few times to look at it. I thought of it as a very old book, published as it was in 1979, two years before I was born, but it wasn’t old then at all. We lived in the locality of Allanson, eight kilometres out of Collie, and I was parochial about it (‘I don’t live in Collie – I live in Allanson’), so I remember checking the index of the book and being outraged to find just one entry for Allanson. No sense in trying to read that book.

I bought a copy of One Day in Collie at the Save the Children booksale last month not particularly expecting to ever read it cover to cover. But I did and it was a strange experience to learn the backstory of the place I spent so many years.

It wasn’t that Collie seemed particularly old when I was growing up, but it felt solid. An uncanny element of reading the book was the account of Collie springing up from nothing in the 1890s after the discovery of coal. It was gazetted as a town in 1897; when I moved there in 1983, some of the first generation of children born there were still alive. I remember an original student of my primary school being photographed in front of the old school building. 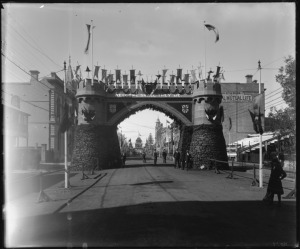 Why was I never more curious about the strange medieval-looking arch which was the town’s seal and formed the logo of my high school? It’s a strange story – it’s a stylised version of a ‘coal arch’ built across St George’s Terrace in Perth in 1901 for the Duke of Cornwall’s visit, one of a series of arches he passed through symbolising different industries in Western Australia. I wonder how much notice he even paid to this arch which is still used as a symbol for a town more than century later.

The ‘one day’ in the title is actually a structuring metaphor – the different phases of Collie’s history as parts of a day – dawn, morning, high noon, afternoon siesta, etc. It grated as I read it as it seemed artificial to me and caused distortions to fit the phase. But it also lends a melancholy sense of perspective to the book, revealed in the final chapter “The Twilight: the Future of Collie” which begins, ‘Inevitably the sun must sink for Collie, the coalmining town, for that is the nature of mining.’ (156) Climate change isn’t in view here, just the finite amount of coal in the ground.

The political machinations behind the history of the coal industry are interesting, by which I mean disturbing. The case for mining coal in Collie was always marginal; it was cheaper to import it from Newcastle in the east or to use a different energy source. But Western Australia needed jobs – as we hear about Adani today. Some were pushing for a state-owned colliery, but instead private industry was allowed to sell the coal at an artificially inflated price to the government railways. The author is no socialist – he was the superintendent of one of the mines when he wrote the book – but he seems to recognise the problem with this. The profit goes to private companies, paid for by the people. It’s how our economy works today and it was happening a century ago too.

I believe in local history – I’d like to write one, if given the chance. We should know the story of the places we live. It’s a challenging genre – so much which could be said, and difficult to balance a readable narrative and inclusivity. One Day in Collie is quite a good history and I’m glad I read it.

9 thoughts on “One Day in Collie: the prehistory of my childhood”