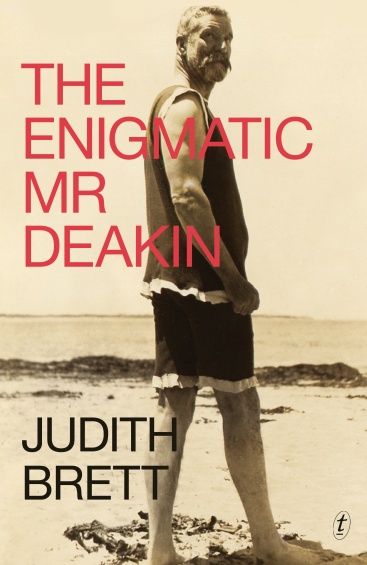 Like many biographers, I have a list of possible future subjects. One of my ten names has been Australia’s second prime-minister, Alfred Deakin (1856-1919). While researching his interactions with Katharine Susannah Prichard, I found him a fascinating character. I was surprised that the only comprehensive biography appeared fifty years ago. But I’ve removed Deakin from my list because Judith Brett has written a superb account of his life in The Enigmatic Mr Deakin, out this month.

Deakin is remembered too, but not so vividly, more as a bearded worthy than a national icon. He was Australia’s most important prime minister in its first ten years after federation, but he sits uneasily as a representative Australian figure. He is too intellectual, too respectable, for the larrikin masculinity of the Australian legend… Deakin was never a mate. He didn’t swear and rarely drank. He didn’t play organised sport nor fight in the Great War…. In short, he was middle-class, well-educated, urbane and supremely self-confident, like the city and the colony in which he grew to manhood. (3)

Australia needs more heroes like this, and Brett lays out a strong case for his significance and his achievements, while always alert to the ambivalence which marks him and his legacy.

Born in Victoria to a middle-class family, Deakin worked as a lawyer and a journalist before entering the Victorian parliament in his twenties. After being caught up in the property mania that led to the depression of the early 1890s, Deakin played a crucial role in federation in the late 1890s and was attorney-general in the first federal government of Australia in 1901. He would go on to be prime minister three times over the next twelve years. He retired in 1913 as early dementia began to overtake him and died six years later.

Brett offers a statement of intent in her introduction that captures the art of biography:

I have tried to give each of the three strands of Deakin’s life its due: his intense inner world, his public life in politics and his family relationships, following the daily, weekly and yearly rhythms, as well as the arc of his life’s physical and psychic energies. My quest has been for the changes and the enduring patterns, the moments of decision and the paths not taken. (6)

The excellent balance of Brett’s biography is one of its achievements. It’s an uncommon feat, dependent on sources—and there are often few for the inner world of subjects—as well as the skill of the biographer. This biography moves skilfully between Deakin at work, Deakin with family and friends, and Deakin in his interior world. The different rhythms Brett mentions give this narrative an energy. Shifting between them lifts it out of the wearying chronological slog of too many biographies.

Deakin was a true liberal, a progressive who wanted a more equal, advanced society and believing the middle class was best situated to achieve it. Despite the Liberal Party of Australia claiming him as their own, Brett depicts a man who had less in common policy-wise with conservatives than he did with the Australian Labor Party. He represents a political tradition suppressed within the Liberal Party of Australia by the dominance of conservatism since the rise of John Howard. Deakin complained of the impossibility of having three political groupings in the first parliaments—Labor, protectionist liberals, and free-trade conservatives—and he reluctantly played a key role in the eventual “Fusion” of the non-Labor parties. Yet perhaps the current war within the Liberal Party and the tension within the ALP with its left wing suggests that three groupings is the more natural state of affairs for Australian politics. It was ALP caucus voting Deakin couldn’t agree with, believing so strongly as he did in the individual conscience and the importance of the parliamentary process of negotiation. Brett depicts him as a master negotiator and persuader who could turn the mood of a town hall crowd or broker compromise between warring parties in parliament. Thus Brett says she wrote this book not only “to bring Deakin back into Australia’s contemporary imagination [and] to understand how he shaped the country we live in today” but also “for the lessons he could teach us about how to handle unstable parliaments.” (8)

Historical biographical subjects present a challenge of sympathetic understanding for both the writer and reader. Thornton McCamish writes in his biography of Alan Moorehead, “It is the fate of the past, and everyone in it, to be condescended to by later generations, if only for their childlike innocence of all we now know.” He’s right—and it’s the task of biographers to resist that condescension in order that a subject might be properly understood. In discussing Deakin’s advocacy of the White Australia policy, Brett writes, “We need to exercise our historical imagination to understand why Australians at the beginning of the twentieth century could regard it as an expression of high ideals.” (265) It’s an ongoing process throughout the biography as Brett explains the context and meaning of various ideas or actions of Deakin’s which are offensive or unpalatable today.

If race is one sensitive point in Deakin’s worldview, religion is another. He was regarded with suspicion by many in his lifetime because of his rejection of conventional Christianity for spiritualism and, later, a very liberal Christianity. In today’s secular age, it’s the depths of Deakin’s spirituality which Brett feels she needs to justify to readers, and she discusses his spirituality sympathetically. His devotion to God was strong and sincere and he filled notebooks with prayers and ponderings about the will of God for his life. This biography has given me a better understanding of spiritualism; in the late nineteenth century when Deakin was most committed to it, it was actually a progressive, “scientific” approach to religion which attracted those of the middle-class who could no longer accept the settled religious dogma of established Christianity.

I was unsurprised, really, to find no mention of Katharine Susannah Prichard in the biography; Deakin knew everyone, and the book is just the right length at 434 pages of text. Yet Deakin had a significant impact on Katharine in her early twenties, which I discuss over several pages of my (as yet unpublished) biography.  They were both living in South Yarra in late 1907 and early 1908 and would walk into the city together, discussing books and ideas. Deakin had known Katharine’s mother when they were young, as well as two of Katharine’s mentors from this period of her life. Even as a committed communist, Katharine respected Deakin enough to write a play honouring him for a competition in 1951 for the fiftieth anniversary of Federation.

The choice of cover photo for The Enigmatic Mr Deakin is striking and appropriate—an aging but strong looking Deakin in an Edwardian bathing suit on the beach. As a handsome hardback, it is certainly worth the cover price of $50. I’m surprised, though, to find the ebook version selling at around $30, which seems too high.

Brett’s biography is wise and compellingly readable. She captures the experience of living, the passing of years, the shifts in attitude and fortune, the development of character. Even if the promises of spiritualism were false and Deakin’s spirit cannot be summoned, The Enigmatic Mr Deakin brings him to life as much as a biography can hope to do. May it foster a wider understanding of a man worth remembering.