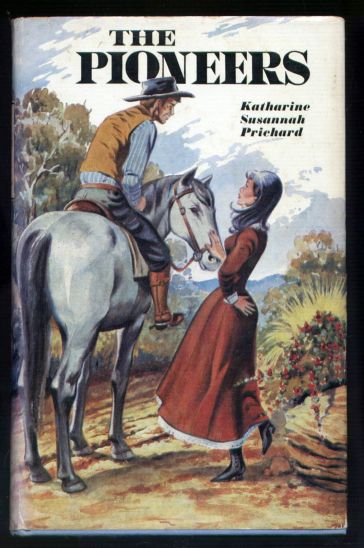 1963 edition of The Pioneers, lightly revised. The comic book style cover is a little unfortunate, but probably captures some of the novel’s spirit.

Two years ago I was trying to decide if Katharine Susannah Prichard was going to be the subject for my biography. I read Ric Throssell’s existing biography first and then John Hamilton’s recent biography of Katharine’s husband, Hugo Throssell. It seemed to me there was room for a new biography, but I needed to know Katharine was a writer I could work on for years. I’d read and loved Coonardoo years earlier, and now I tackled The Pioneers (1915), her first published novel. It was reading it in the arts courtyard at UWA between sessions at the 2014 Perth Writers’ Festival that I decided she really did seem the writer for me. Pioneers is little read today, and yet I found it engaging, an intriguing mix of generational saga and romance set in nineteenth century Australia. It was interesting even in its flaws and cliches, and had moments of beauty and drama.

Two years later, I’ve just finished re-reading it for different reasons. After a flash forward into World War I to prepare a speech, I’m up to 1904 in my biography, the year Katharine spent as a governess in Yarram, South Gippsland, 220km south-east of Melbourne. The tales and landscape of this country inspired her to write the novel nine years later when she was in London. Working out where to fit Pioneers in my story of Katharine’s early life is a challenge. Its writing in 1913 in London reveals much about her development as a novelist and her relationship to Australia, as well as glimpses of her politics and worldview at this time. Its publication and reception in 1915 mark a kind of climax in her story, the point at which she achieves the success she has been chasing since she set out to be a writer as a schoolgirl. (The plots of non-fiction aren’t as neat as fiction – the resolution of  her love life, her radicalisation, and the struggle to write a worthy follow-up to Pioneers form a second climax.) Yet this current 1904 chapter requires some discussion of the origins of Pioneers.

I was in Yarram for two nights last month, staying with Nicole and baby Thomas in a renovated presbytery which dates from the 1890s. It brought my biography alive to imagine Katharine walking past this house on her way to the showground where she was disqualified from the ladies’ trot for racing; or arriving at her first grown up ball, probably held at the Mechanics’ Institute next door to us. I also gained a sense of the land, the hills in the distance, the farm land denuded of trees, the isolation of the town and its nearby settlements, including old Port Albert. (All of this will require its own blog post, another time.)

In the 1960s, Katharine wrote to Len Fox that, “The whole story was woven about stories told to me by pioneers – and an escaped convict – it does not ‘belie its title’, but deals honestly with the pioneering period in South Gippsland from the coast about Tararille, Port Albert and into the hills region.” She complicates any attempt to pinpoint the historical and geographical basis of the novel by renaming all the places, but “Port Southern” is clearly Port Albert, and “Wireeford” is probably Yarram. If the novel is shaped by the contemporaneous conventions of historical fiction it’s only lightly, with some attempt to imagine the pioneering conditions and recount the growth of the area (particularly in an overview in chapter 18). Taking Katharine’s own account of the novel’s origin, it’s more as if she’s shaped the tales of the area she heard to fit the conventions of the romance and the generational saga, the genres she was actually writing within.  (The point of comparison in her oeuvre is her late goldfields trilogy, which similarly weaves in the tales and folklore of a place, but does so within a framework of historical events, from a visit by the premier to the impact of the wars and the depression.)

Pioneers is very relevant to her year in Yarram regardless of how I come to understand her later use of it, and I will be writing about it as one of three biographical “origins” of the novel I’m aware of so far – the other two being her viewing of McCubbin’s painting The Pioneer (also completed in 1904 but not exhibited until a few years later) and the November 1902 Pioneers’ reunion of the many descendants of her Prichard grandparents, who’d arrived in Victoria fifty years earlier.