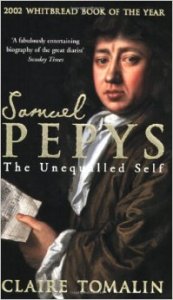 Claire Tomalin is a master literary biographer who makes the genre more compelling and interesting than any other writer I know. I’m two-thirds through her 2002 book on the 17th century diarist and naval administrator, Samuel Pepys. I offer some notes on her biographical method.

1 thought on “Some notes on Claire Tomalin’s Samuel Pepys: The Unequalled Self”