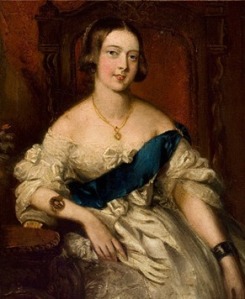 I’m an admirer of Julia Baird, host of ABC TV’s The Drum. She has taken on the powerful Sydney Anglicans over their attitude toward women more effectively than most. She is an interesting and balanced presenter, quick-witted and incisive. If she shares the political affiliation of her brother (NSW’s premier) and her father (a former federal MP), maybe there’s hope yet for that party.  She’s also a biographer. I read that The Drum gig is what she’s doing because she used up her advance on her long-awaited biography of Queen Victoria.

In September last year, she published “A Queen’s Forbidden Love” in the New York Times, sharing her great scoop: evidence of physical intimacy between Victoria and John Brown, after Victoria’s doctor recorded in his diary how he observed him lift her skirt up playfully. The diaries are held by his descendants, and it seems Baird is the first to do the detective work to yield their secrets. There is much else to admire and discuss in her article, but I’m fascinated by her act of revelation. Why last year, before the book has even been published?

Perhaps it creates a sense of anticipation, building the pre-publication publicity. Perhaps she just couldn’t wait to tell everyone (I understand this – there at least one discovery about Katharine Susannah Prichard I am impatient to reveal.) Perhaps she was pushed – someone else was about to scoop her, after more than a century. The risk of her article, it seems to me, is that a different biographer will be the first to use it in a book. But biographies move quite slowly, and perhaps Baird’s book is not far off. (She was absent from The Drum recently due to a “publishing deadline.”)

The other consideration for the biographer in sharing a breakthrough is to make sure they do it properly, particularly if it’s controversial. Have they got all their evidence ready? Are they able to defend their claim?

What do you think? Should biographers keep their discoveries up their sleeves or publish ahead of the book?