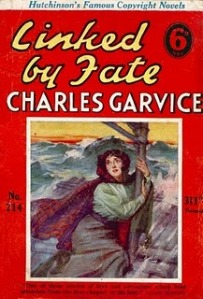 Katharine Susannah became instantly famous across the Commonwealth when she won the Australasian section of the great Hodder and Stoughton All-Empire Competition in April 1915 (the very month of Gallipoli) for her unpublished novel, The Pioneers. It was the big break she had been working hard towards for a decade. I think The Pioneers, for all its faults, is genuinely a very good novel, but at the time of the competition, a number of critics were unwilling to take the winning entry seriously because of the judge, British writer Charles Garvice.

The columnist in Wellington’s Dominion wrote, “…to foist such a fifteen-rate novelist as Mr Garvice upon Australasian writers as judge of their work was little short of an insult” (May 29, 1915, 14). Almost no-one remembers Garvice today, but at the time, he could claim to be the biggest-selling British author alive, having sold millions of the romances he produced many times a year. Among serious lovers of literature his name was a byword for dross. It seems that to have him judge a literary competition was a little like inviting Danielle Steel or Dan Brown to do so today. When his own books are so forgotten, it is a beautiful irony that one of his great legacies was to launch the career of such a significant Australian writer. Even if Garvice wasn’t a great writer, could he have been a good reader, able to discern something special in Katharine Susannah’s work? The Pioneers is a romance, melodramatic at times yet with characters more vivid and a plot more interesting than the genre usually produces.

I would love to know Katharine Susannah’s opinion of Garvice’s work, and the complicated feelings she would have felt at being awarded the prize by him. I think she would have been biting her tongue, and a little uneasy amidst the jubilation.

Garvice has fascinated at least two writers in recent years. In her fine essay “Pursuing the Great Bad Novelist”, Laura Sewell Matter tells of her quest for Garvice, after finding some pages of an Icelandic-language book wash up on a beach in Iceland and eventually tracking it down as a translation of one of Garvice’s novels. She flies to London to read one of only two copies held by libraries in the world. It is a classic biographical quest, the genre I researched for my MA, the quest for Garvice tied up to Laura’s quest to find herself. You can download the essay from her website. Steve of Bear-Alley blog wrote a post on Garvice in 2010, tracking down some biographical details for Garvice, as well as a long (and still incomplete!) bibliography of Garvice’s works.

4 thoughts on “Katharine Susannah and the “fifteenth-rate” writer, Charles Garvice”