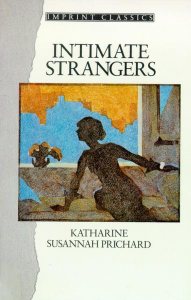 When Katharine Susannah Prichard set off from Perth for London and then a tour of the Soviet Union in May 1933, she left the manuscript of Intimate Strangers behind. It is the story of the troubled marriage of Elodie and Greg Blackwood, set in Perth during the Depression. The manuscript she left behind finished with the suicide of Greg after he has gambled their house away, and presumably before Elodie even has a chance to tell him she’s leaving him for the adventurous Jerome Hartog. While Prichard was somewhere in Sibera, war-damaged Hugo Throssell shot himself, having piled up huge debts from a failed ‘dude ranch’ venture at their home. She later expressed niggling doubt to her son, Ric, that perhaps part of his state of mind had been caused by reading the ending of the novel. Before publication in 1937, she altered the ending to set up a reconciliation between Greg and Elodie. The novel and the suicide will always be associated, and the issue has resurfaced often in the years since, including when the novel was turned into an ABC mini-series in 1981 and a magazine ran a sensationalised headline. In the introduction to the 1990 edition, Ric acknowledged parallels between Greg and Elodie and Katharine and Hugo, but emphasised the differences and the creative alchemy that amalgamates and transforms people and events beyond simple equivalencies; ‘the unknowable truth remains unknown.’

Intimate Strangers is a portrait of marriage as a concept and institution more than a portrait of a particular marriage. Elodie and Greg’s problems in their marriage of fifteen years are set against the troubled relationships of those around them, especially virginal tomboy, Dirk, who holds a line of suitors in her sway, not wanting to marry any of them, but eventually yielding to one for money. On the beaches of Calatta and then back in the suburbs of Perth, Elodie contemplates running away with Jerome as Greg continues his dalliances and fails as a provider. Over and over, the novel circles around the questions of finding sexual and personal fulfillment in marriage and out of it, with sexual attraction pulling people away from commitment. There is no clear message; the appeal and the problems of adultery are both presented. The resolution has Elodie and Greg recommit themselves to each other at the same time as they applaud Dirk’s escape from her marriage. In the moral world of the novel, Dirk’s escape is permissible because the marriage’s oppression mirrored that of the capitalist oppression of workers; as part of that, her husband Ted was violent, leaving her bruised. Greg is not as bad as Ted, but by today’s standards at least, he rapes Elodie in Chapter 6.

Intimate Strangers is distinct among Prichard’s novels. Most of her novels are researched, taking place among a particular occupation group – opal miners, timber workers, circus workers, station workers. Intimate Strangers is closer to the middle-class, urban world Prichard moved in. The urban setting is unusual for her, although as Throssell points out in the introduction, two of her lesser-known works, Windlestraws (1916) and Subtle Flame (1967) are also set in cities. Her other novels are also much more plotted; more than any other her other works, Intimate Strangers occurs within the characters’ consciousness, their inner conversations and impressions. However, just in case you were in doubt that you were really reading Prichard, in chapter 19 Dirk and Elodie turn up to a rally of unemployed workers in Fremantle to hear Tony speak, and the speeches of a number of the unemployed are reported. The tumult of the Great Depression is not foregrounded, but intrudes most here and when Greg loses his job in the downturn.

The novel is drenched in seawater and sand, lovingly evoking Perth beaches in the amalgam place of Calatta, part Rockingham, part Cottesloe. The characters begin on holiday there for the first half of the book, and return a couple of times, including for the final resolution. All the characters live to swim or sunbake or walk along the beach or fish. It is a valuable picture of Western Australian beach culture in the 1930s, sitting alongside J. M. Harcourt’s descriptions in Upsurge! (1934).

The novel enjoyed a brief renaissance in July 1981 with the broadcast of the two part mini-series adaptation. A review for the mini-series by Cul Cullen in The Women’s Weekly is one of the most hyperbolic hatchet jobs I’ve come across, describing it as ‘the silliest thing to flicker, unwatched, across our screens’; ‘aimless, stitled and utterly without relevance to a contemporary audience.’ Surely it couldn’t have been that bad; but the only way to know today is to watch the only copy I can see listed in the world at the National Archives. (In his introduction, Ric Throssell writes that it was also The Women’s Weekly which published the article at this time blaming the novel for his father’s suicide. However, The Women’s Weekly is now fully digitized for that year, and there is no trace of the article. It may have been a different magazine.)

While avoiding simplistic autobiographical readings of Intimate Strangers, it is an anguished book from an anguished period in Prichard’s life. The characters’ ponderings on how to find happiness and satisfaction in life and particularly marriage are themes which resonate today as well, even if the novel reads as a product of its age. It is not the Prichard novel I’d recommend readers start with, but it is a significant work in her corpus, demonstrating her versatility, and shedding light on its context.