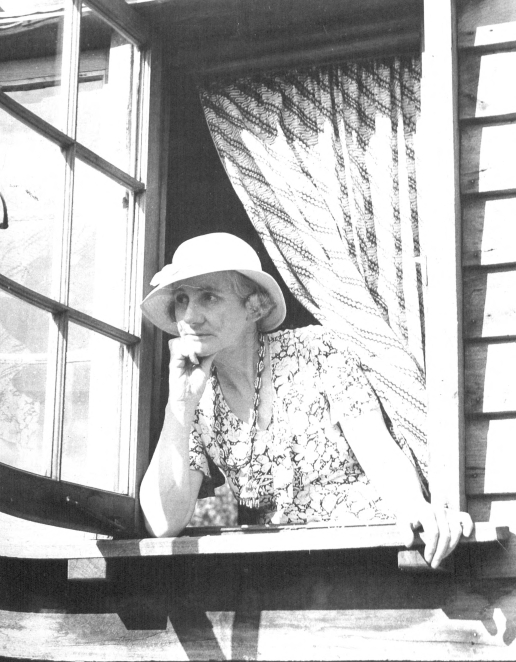 Katharine Susannah Prichard looking out from her workroom. From This Australia 1985, date of photograph ca. 1930s.

I’ve decided to write a conventional biography for my first one, ‘cradle to grave’ as it’s called. Because of that, I feel the need to start with an introduction that grips readers and gives them a taste of Katharine’s life, why it matters, and some of what lies ahead in the narrative. Perhaps this is misguided; I just picked up Jill Roe’s Stella Miles Franklin: A Biography off my shelf and she starts in 1879 with Franklin’s birth. Yet as acclaimed as Roe’s biography has been, it didn’t grip me. And Miles Franklin has a name recognition today which Katharine doesn’t have.

In her customary manner, Claire Tomalin begins Thomas Hardy: The Time-Torn Man (one of my favourite biographies) with a crucial scene from his life. ‘In November of 1912 an ageing writer lost his wife. He was not expecting her to die, but then he had not been taking much notice of her for some time. They had run out of conversation, he was in love with another woman…’ Tomalin argues strongly for Hardy’s significance as a poet; the death of his wife was what inspired his greatest poetry.

The first opening to my biography was an attempt to emulate this. I began with the  suicide of Katharine’s father, Tom Prichard. At that stage, the book was only of her early life. The suicide has never been written about properly and her relationship with her father – her rejection of his beliefs but her craving for his praise – is crucial to her early life. (I would now say the death of her brother in the Great War a decade later probably had an even greater impact.) To open with the suicide began to seem to me the wrong move. Was it sensationalising? Maybe, but the bigger problem is that to begin with the event robs it of meaning; readers need to know more about Tom before they care about his death. It wasn’t completely analogous to what Tomalin was doing.

Sylvia Martin uses this technique effectively in Ink In Her Veins: The Troubled Life of Aileen Palmer. She describes a photograph of a lost portrait (found after publication!) and goes on to write, ‘I found this portrait when I was in Canberra burrowing through the chaotic papers of Aileen Palmer in the National Library archives.’ After relating why Palmer intrigued her, she gives two ‘pen portraits’ of Aileen at different points of her life, closer to fictionalisation than the rest of the biography.

Hazel Rowley’s Christina Stead: A Biography has a two page prologue. She begins with her own interest in Stead – ‘It was the interviews Christina Stead gave late in life that aroused my curiosity’ – but doesn’t linger on that. Instead, she gives a short portrait of Stead’s life and significance and her attitude to biography. It’s understated and leaves readers wanting to know more.

The current introduction to my biography is closer in approach to Rowley’s than the other examples, but still different again. It’s an account of the different names Katharine has been known by – ‘Child of the Hurricane’ and the legend of her birth, her naming after a dead aunt, her use of another aunt’s name as an alias in the autobiographical Wild Oats of Han, her family nicknames ‘Kattie’ and ‘Kit’, her married name, ‘Mrs Throssell’, the insult she embraced, ‘Red Witch’, and the supposed code-name ‘ACADEMICIAN’ which has seen her accused by some historians of being a Soviet spy. The account of these names give readers the arc of her life. I hope it leaves them intrigued and wanting to read the next (projected) 150,000 words. I don’t yet know if it does.

10 thoughts on “How to start a biography?”