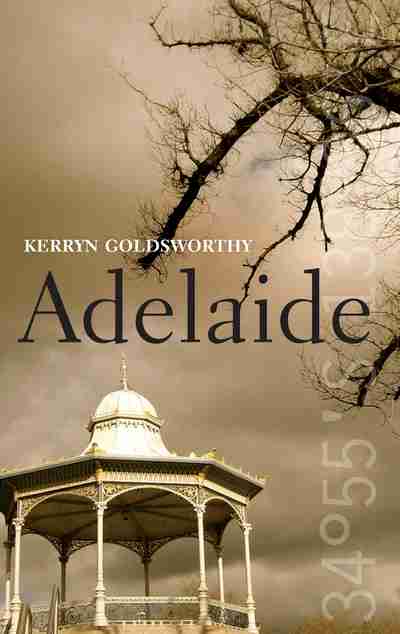 I’ve never lived in Adelaide, but it has a sense of home for me. It’s the city the Hobbys come from; my ancestor Thomas Hobby, who bears the same name as my son, was one of the early settlers of the suburb of Norwood in 1849. It’s also where my in-laws grew up and now they’ve returned there, we’ve visited quite a few times over the last decade. From them, I’ve learned some of the peculiarities and lore of the place and had a sense of the pride Adelaidians hold about their distinctiveness.

Kerryn Goldsworthy’s Adelaide (2011), brings together much of what I’ve heard and experienced of the city into a bigger frame. It’s a splendid work of literary non-fiction, weaving history, cultural memory, and memoir into a portrait of Adelaide. Goldsworthy’s structure is just right, building her narrative around nine objects to consider important themes and representative moments of Adelaide. Its order and elegance calls to mind the same qualities in Adelaide’s centre, but without replicating the blank disappointment of Victoria Square at the heart we learn about in the book. Her chapter on ‘The Painting’ highlights the appeal of the book – and the NewSouth Cities series – for me.  In considering the painting of the Proclamation of South Australia, begun twenty years after the event in 1836, she is as concerned with cultural memory as history. The inaccuracies and controversies around the painting are as revealing of Adelaide as a straight historical consideration of the proclamation. The book moves toward the present, with fascinating reflections on the contrast between three decades under the conservative premier Thomas Playford and the Don Dunstan decade in the 1970s, the ‘weird Adelaide’ reputation, and frog-cakes, among many other things.

Throughout the book, Goldsworthy is both aware of a degree of truth in caricatures and criticisms of Adelaide while also fondly willing to defend her home-city. She deploys memoir in just the right quantity, adding personal connections to themes and periods which illuminate but never become distracting. At the end of the chapter on the painting she writes that its purchase by the Art Gallery of SA in 1936 during the state’s centenary was an act of memorialisation, ‘a point of connection between the present, in all its unremarkable familiarity, and the past in all its unrecoverable strangeness.’ It’s an insightful remark which sums up the process of the book itself, which is also surely trying to recover the past and make the present seem a little more remarkable, as well as constantly joining the two.

10 thoughts on “Adelaide by Kerryn Goldsworthy”