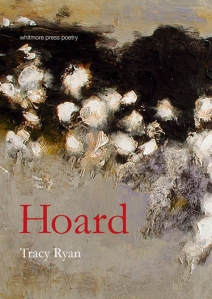 I like poetry collections with a strong thematic unity which hold together as a book. My friend Tracy Ryan’s latest collection Hoard (Whitmore Press, 2015) is a beautiful example, as she examines the Irish boglands and the hoards hiding within from different angles, different times, different voices.

The collection begins with “The changeling addresses Ireland,” a long poem which gives a sense of the patchwork of styles and voices which compose the book as a whole. Thematically, the poem is on a larger scale than the rest of the collection, situating bogs and hoards in the context of the poet as an Australian of Irish descent returning to a place of origin. A century ago, the relationship of Australians to Britain and Ireland was a pressing concern; even if this is no longer the case for most Australians, time has only complicated the dimmed ties:

diverged from your
conflicted history

which even so tries
to persist in me

The perspective in the poems which follow shifts from that of “Hoard hider” to “Hoard finder” to the ‘experience’ of the hoard itself in “Orphaned hoard” – “wrenched out of context / finds itself split and separated”. All these people, all these objects connected across time and consciousness by this landscape. The narrator makes a welcome return, too, providing some sense of the quest through the boglands which are generating these poems in a couple of poems like “Bog conversation”:

Searching for a comparison point in my limited knowledge of poetry, it’s one of my favourite poems, Auden’s “The Quest”, which comes to mind. The twenty parts of that poem offer a similarly shifting, multi-perspective view of the subject, adding up to a composite narrative that is different – and in certain ways superior – to the more consistent narratives fiction tends to demand. In this multiplicity of ways of looking at the bog and the hoard, the subject begins to turn into a lens for looking at the whole world anew, reimagining things like memory, the passage of time, legacy, belief, identity. It’s this sustained attention to one subject which allows Tracy to drag from it and hide in it so many treasures.

2 thoughts on “Thirty-three ways of looking at the boglands: Tracy Ryan’s Hoard”